World Ocean’s Day is on June 8th, and one way we would like to observe this day is by featuring a scholar who is passionate about protecting marine life. Let’s see how Carson Scholar, Juliana Blackman, is doing her part to make the world a better place. 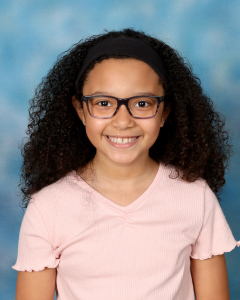 We only have one planet, and 71% of it is water. Our oceans are home to many species of animals, and we have not yet discovered many of them. Could you imagine a world without marine life? In addition to marine life being undiscovered, 80% of the whole ocean is undiscovered. It is estimated that 97% of our water comes from the ocean, and our oceans are being polluted. Some are filled with garbage. We need to protect our oceans. These are just some of the reasons why I care a lot about the ocean. In addition, I also care a lot about endangered marine life such as sea turtles, the Mexican walking fish/Axolotl, the Vaquita, pink river dolphins, and many more. You may not have even heard of some of these species, but they are out there, and they need our help. We can do it. We can save our oceans.

I have always been interested in our oceans, but when I learned about the pollution in the ocean during a lesson at school, I knew it wasn’t right. I knew that we could fix this. When I did more research, I saw that many oceans are filled with trash and waste. I knew that if we didn’t litter, then it would help the environment, but I had no idea that it would have such a big impact on animals and places all around the world.

When I was on a family vacation in Mexico, my family was able to participate in a sea turtle release. A sea turtle conservation organization had hatched sea turtle eggs, and when it was time to release them, I was able to hold one and watch her swim into the ocean. That experience inspired me to think differently about the oceans. I knew about pollution of the ocean, but this made me think about other ways to help marine life. Being a marine biologist allows you to learn about the animals and their amazing habitat!

I am only 10 now, but when I am older, I would like to be a marine biologist and help our oceans. Marine life is very interesting to me because there are so many things to be discovered! I am very interested in all of the different animal species that live in our oceans and waters. Maybe one day I can discover a new species of marine life and get to study it!

The oceans are home to many amazing creatures, and their home is being destroyed. For that reason, many animals are dying from the trash and pollution. Take the vaquita for example, there are less than 10 left in the world. They will go extinct if we don’t help them. We need to stop what we started. We need to stop polluting. 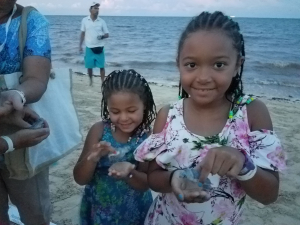 Scholar Juliana Blackman participates in a sea turtle release (above).