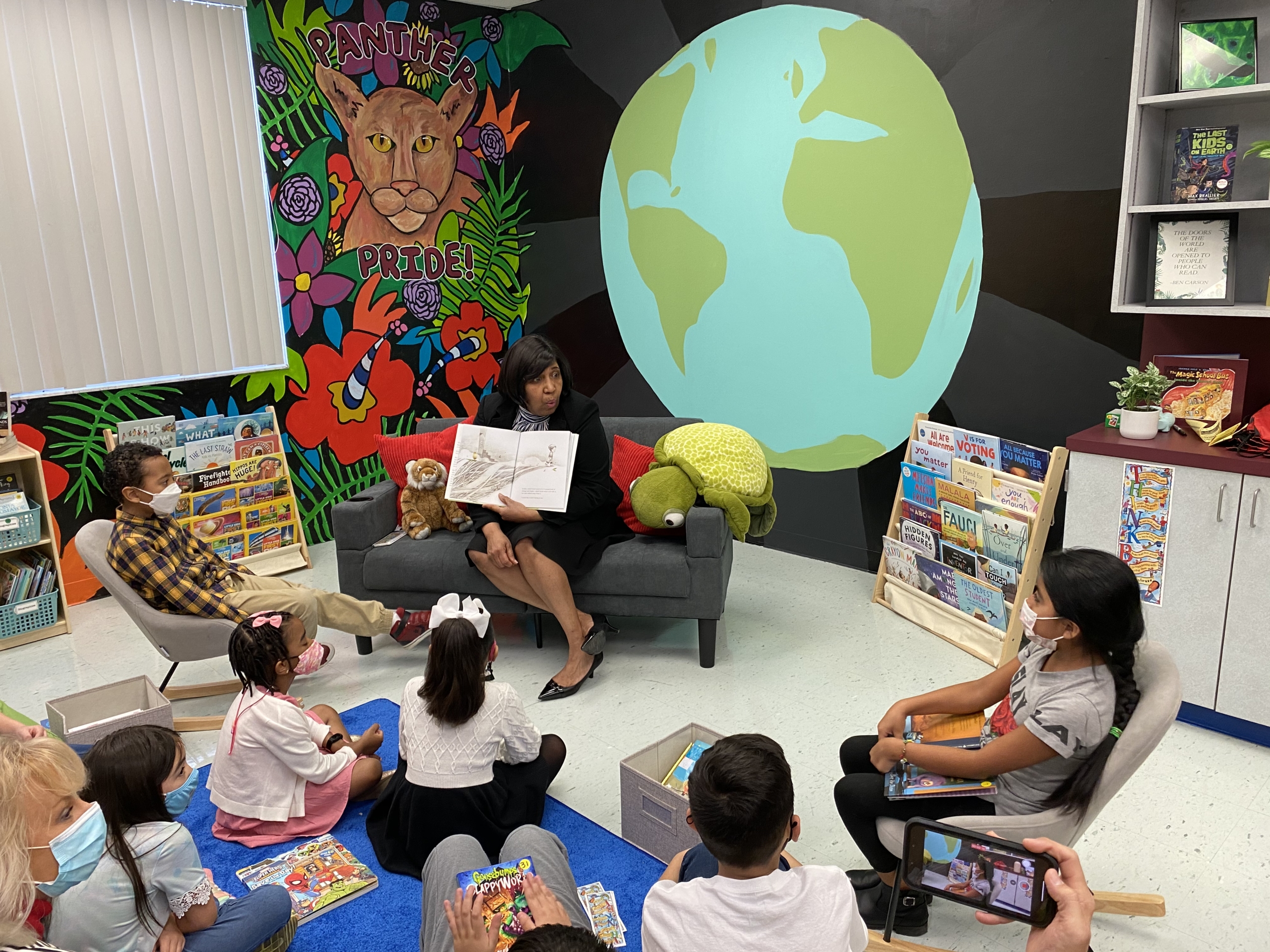 e Worth, as this institution of learning became the 25th THINK BIG Reading Room to open in Palm Beach County!

Undaunted, but in keeping with school policies, guests wore masks and signed in at reception. Each guest was escorted to the decorated cafeteria and seated by the 5th grade safety patrols. These students were selected based on their demonstration of leadership on campus through being a positive role model.

The excitement was palpable from the moment you set foot on the campus, and the air was buzzing with anticipation! Over 70 students in “We think big @ Highland Elementary” t-shirts were seated up front on the right, whereas the 30-member band was seated to the left.

Only a few classes were assembled in the room behind the honored guests, but all students in the school were able to witness the celebration via live stream! The CSF staff was even able to view the entire program from Maryland!

The program opened with the traditional welcome by principal Elena Villani, who also thanked all those who contributed to the development of the reading room. It was a united effort, and even the students helped by giving their input…from book selections by authors and series as well as the room’s layout, to the types of furniture to be included. The principal declared,

“Our students are embarking on a safari to success!” 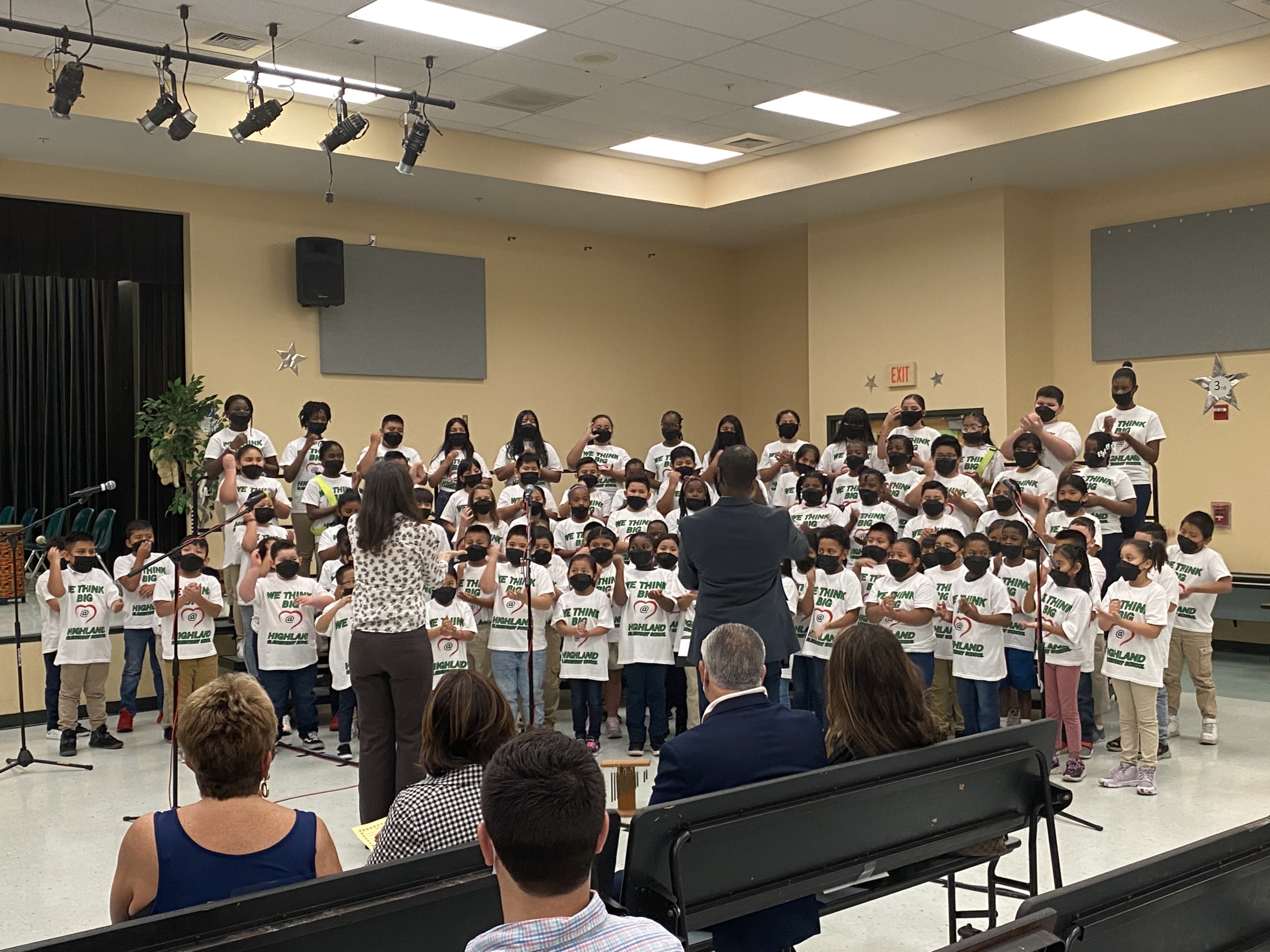 After Principal Villani led everyone in the Pledge of Allegiance, Mrs. Jody Passov of the nearby BallenIsles community ascended to the stage. As chairman of the BallenIsles Charities Foundation, she shared a brief history of the group’s relationship with Palm Beach County schools and was happy to inform us that Highland Elementary is the 5th reading room sponsored by their organization. The charity has consistently donated one reading room per year for the past four years. She added that they are committed to opening up another room next year!

The 70+ member Highland Elementary Panther chorus and Orff Club began their performance with a drum roll and bells. Their chanting of popular quotes of Dr. Carson was partly in unison and partly antiphonal, interspersed with cymbals and other percussive instruments, resulting in a very impressive presentation directed by Olga Bacher and Emmanuel Fergile. The group followed with an inspiring song accompanied by hand motions:

And this was the encouraging, heartwarming ending:

“The world is a rainbow…and when we work together it’s such a sight to see!
The world is beautiful when we live in harmony!”

Mayor Betty Resch followed with warm greetings and congratulations from the newly re-named city of Lake Worth Beach.

The program continued as the school band, directed by Olga Bacher, started with a lone snare drum introduction which became a duet when a mellow clarinet joined in with a patriotic tune resembling “Yankee Doodle.”

When the rest of the band began playing along, a sense of unity and purpose settled on the audience like a soft cloud.

Mrs. Candy Carson then shared thoughts on the importance of reading as well as some “brain facts” she had learned while listening to her husband on the speaker’s circuit for years. For example, “Your brain can process 2 million bytes of information per second!”

She also encouraged the students to take advantage of the special gift of the reading room to develop themselves to be the best they can be.

Dr. Carson appeared via video, speaking of his career as well as his journey as a child from the bottom of his class to the top, using the reading program 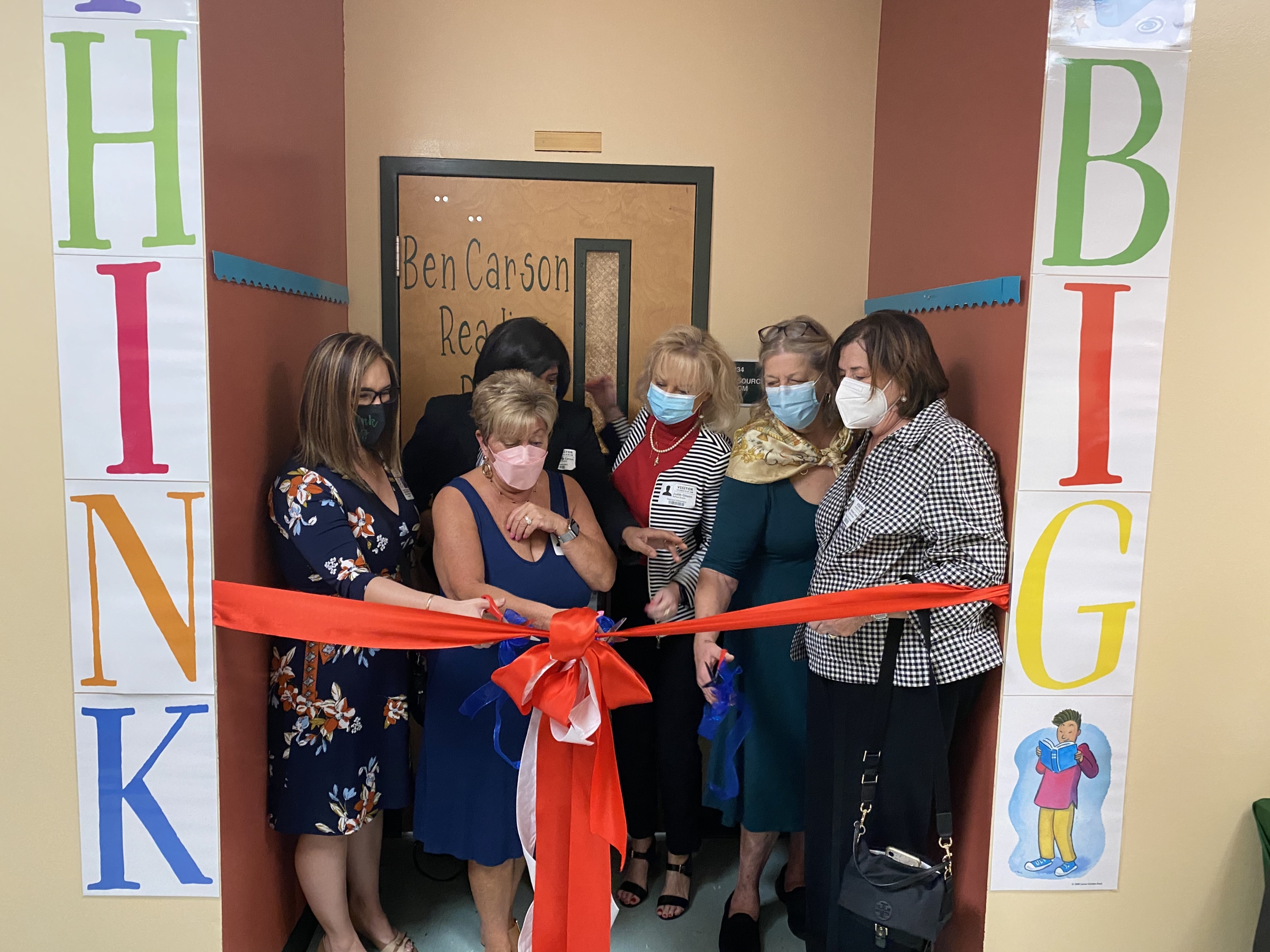 imposed on him by his wise mother. He pointed out the advantages of reading and the joys and adventures that are just waiting for a reader to discover and explore! His last charge to the students was, “Read actively and always THINK BIG!”

The precision of the Highland Elementary Panthers World Drumming Ensemble was something to behold! Composed of more than 40 students on Tubano drums, and directed by Emmanuel Fergile from his djembe drum, the question Mr. Fergile would beat was followed by a unique answer in unison by all of the students. The patterns the kids drummed were interspersed with arm and hand choreography. No one missed a beat!

While students dispersed to their classrooms, guests moved to the reading room site where Assistant Principal Frances Frye led the ribbon cutting ceremony. The countdown started with 5…4…3… 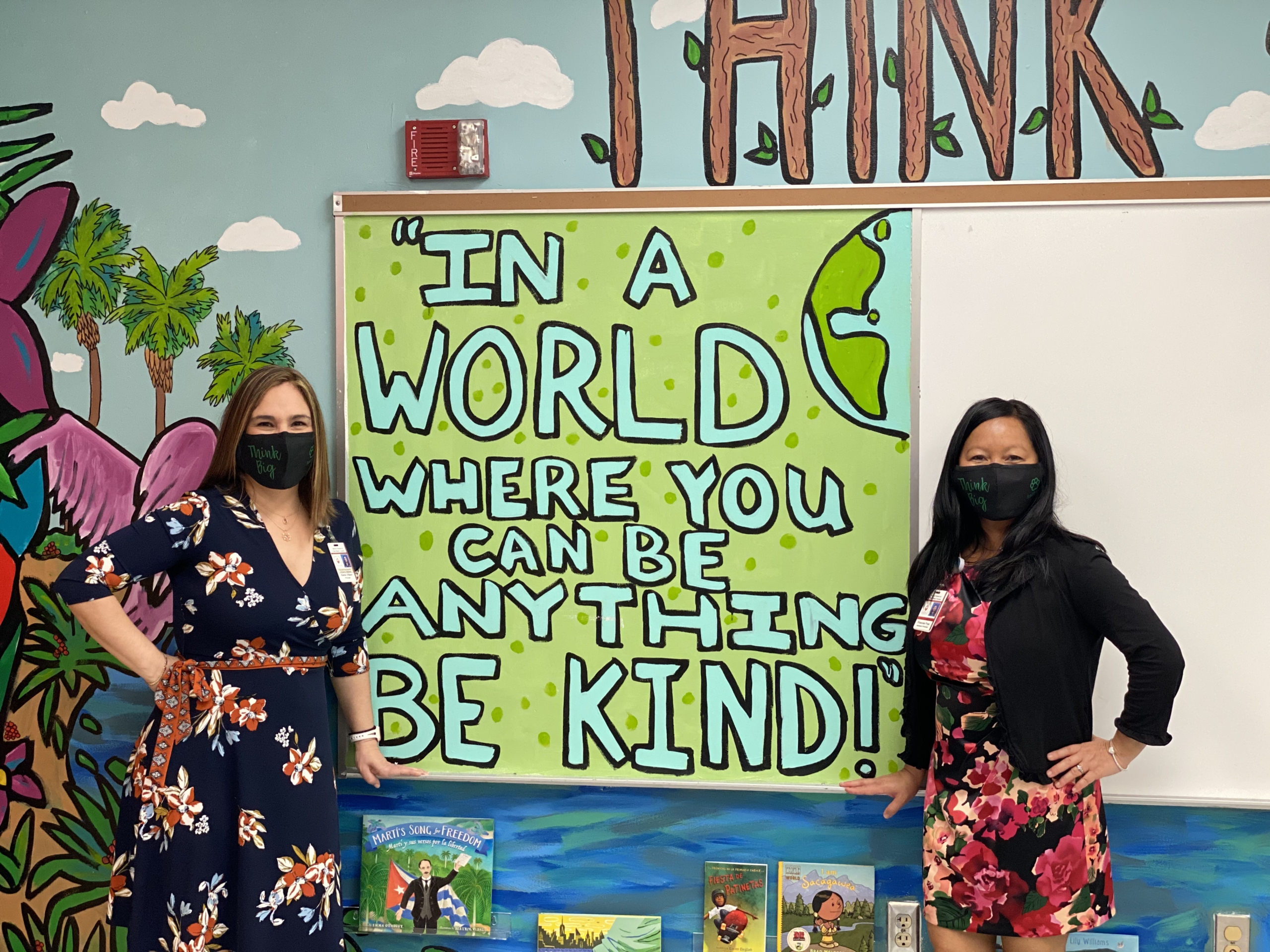 Boldly proclaimed on one wall, “Wild About Reading” (each letter a different wild-animal-coat-pattern) this safe haven is a retreat from the cares of this world. A lively, colorful mural including local flora and fauna of the Everglades as well as a prominent depiction of a panther (school mascot) covers every inch of wall space, sparking the readers’ imaginations. Special thanks to muralist Hilary Mangel for making the walls come to life!

Bent-wood rocking chairs, beanbag chairs and other kid-sized, kid-friendly seating is strategically spaced about the room between the low and easily accessible bookcases. With books organized according to reading level and myriads of kid-themed interests, every child can discover adventures to pursue!

Special Thanks to BallenIsles Charities Foundation

With Appreciation to the Highland Elementary School Faculty 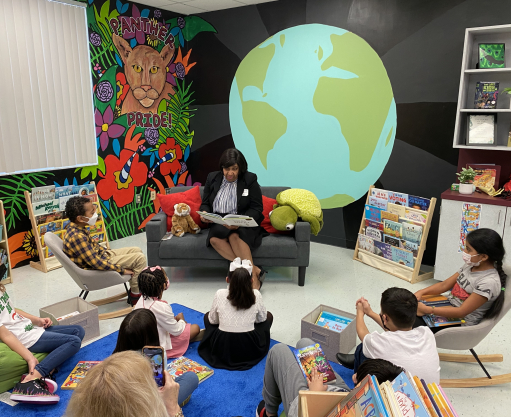