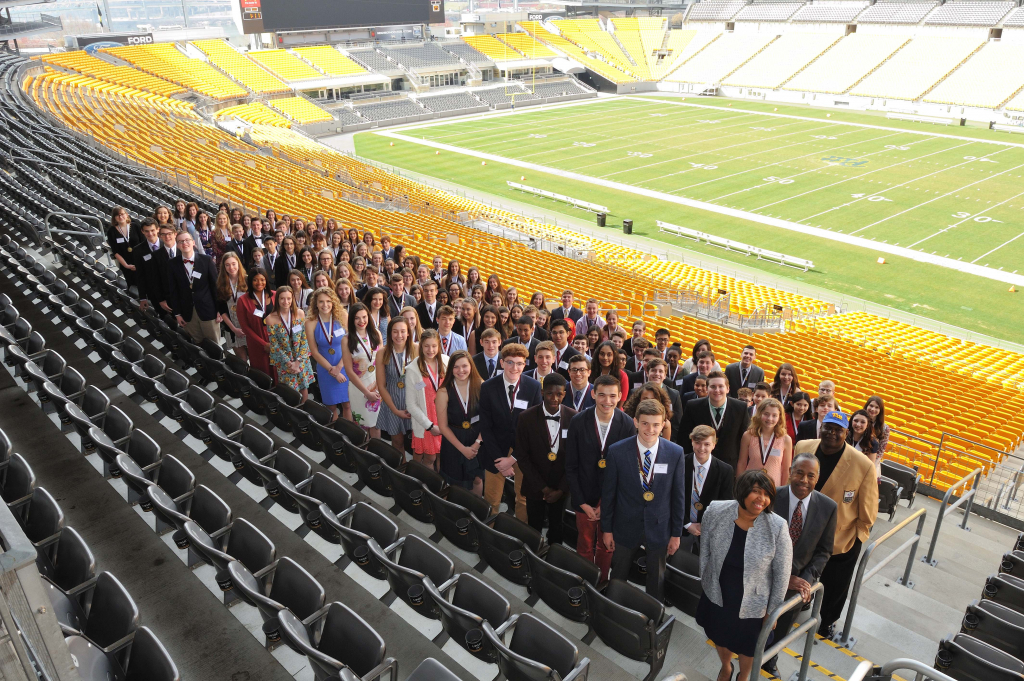 Learn more about the Pittsburgh Chapter 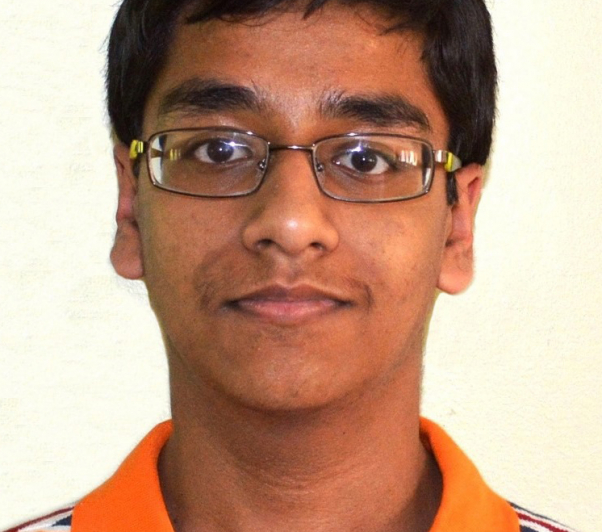 Neeloy is an 11th grade student from Pittsburgh Science & Technology Academy in Pittsburgh, PA. Neeloy is a member of the Robotics Team, the National Honor Society, the Math League Team and is an SciTech Ambassador for Magnet School Program. He enjoys computer science and engineering because he loves solving read world problems, scaled down, with simple solutions. He received a Carnegie Library Labsy Participation Award and a STEM Computer Science Award. He serves as a mentor for Hour of Code and volunteers for the Susan G. Komen Race for the Cure event every year. He enjoys hosting the Bengali Association of Pittsburgh Cultural Program and teaching younger children how to play soccer.

News from the Pittsburgh Chapter

Sunday, April 7 will be a special day to remember for our 2019 Pittsburgh Carson Scholars! There were 134 scholars in attendance celebrating their academic success of having at least a 3.75 GPA and demonstrating outstanding humanitarian qualities. These high achieving students in grades 4-11 were awarded $1,000 college scholarships. This year’s Pittsburgh Banquet was held at Heinz Field from 10:30 a.m. to 12:30 p.m. The event began with a wonderful introduction from emcee Jennifer Tomazic, news reporter for WPXI-TV. Pittsburgh Chapter President Fran Donahue delivered the welcome and kicked off the awards celebration.

Several scholars participated in the banquet this year. Adrienne Simons, a 5th grader from Pittsburgh Arsenal PreK-5, led the group in the Pledge of Allegiance. Eighth grader Leyu Belachew represented East Catholic High School and introduced our keynote speaker, Dr. Ben Carson, to the stage. Dr. Carson shared an inspirational speech that captivated the audience. One parent commented, “It has inspired me to consider doing more to help others through various volunteer opportunities and to be a better role model for my own children and others.”

The banquet continued as Sarah Helwick, an 8th grader from Sacred Heart Elementary School, delivered an eloquent blessing. Three-time Carson Scholar Zachary Esch, a junior from Seton – LaSalle Catholic High School, was this year’s musical performer. He dazzled the audience with his rendition of “Corner of the Sky” from the 1972 musical Pippin while lunch was served. After lunch, Coryn Ferguson took the stage to share her scholar essay. This 11th grader from Seneca Valley Senior High School discussed being cut from the swim team, and how she was able to turn a disappointing situation into a positive learning experience. To conclude the banquet, Mrs. Candy Carson welcomed this year’s honoree. Rickey Jackson, Pro Football Hall of Fame Member, was honored with the 2019 Power of Excellence Award, which recognizes a person who demonstrates excellence in their career and serves as a positive role model. View photos from the 2019 Pittsburgh Awards Banquet

Our friends in Pittsburgh are doing a double take. After 11 successful years of fundraising, the Pittsburgh Chapter has transitioned to a new way of providing scholarships to local students and it’s twice as nice. This year, the Pittsburgh Chapter doubled down and executed two events in one day. These two events were a wonderful success thanks to the hardworking golf and dinner committee: Thomas and Fran Donahue, Robert and Rosemarie Schuler, Gerald and Patti Loyacona, and Richard and Mary Krauland.

This doubleheader began with a golf tournament at Laurel Valley Country Club in Ligonier, PA. Thirty-two golfers including CSF Co-founder Dr. Ben Carson arrived at Arnold Palmer’s home course to show off their skills and have some fun.  Competition was tough, so golfers had to work twice as hard to come out on top.

The Pittsburgh Chapter was double booked for the day. The conclusion of a successful golf tournament led to the beginning of an exclusive dinner event at the Duquesne Club in Pittsburgh, PA. The evening began with a spectacular silent auction consisting of a wide array of items such as original artwork, tickets to a Pittsburgh Penguins hockey game and a diamond necklace donated by Chapel Hill Jewelers. Guests were able to place bids on various items and mingle while listening to a live piano performance. Candy Carson didn’t have to think twice, she welcomed the guests to the special evening to benefit high-performing young students. After enjoying a soothing violin performance during dinner, Dr. Ben Carson was introduced by President of the Pittsburgh Chapter, Fran Donahue. Dr. Ben Carson delivered an inspiring keynote speech on education and the importance of a “THINK BIG” mentality.

With the Pirates playing the New York Mets and the Carson Scholars Fund’s (CSF)  11th Annual Pittsburgh Banquet, Heinz Field was teeming (pun intended) with excitement.  The regal routine of entering through the club entrance, taking the special elevators to the second floor lounge and exiting into a world of starry wonder made all the celebrants of academic excellence feel welcome.  The newest stars on the horizon were of course the Carson Scholars and to emphasize the point, 20-inch balloons in gold, red and blue hues hovered above many of the tables.  Each balloon had four smaller well-rounded gold ones just below the star, representative of the parents, educators, families and mentors who support the academic superstars! Read more.

Photos from the 2015 Pittsburgh Banquet

80 degrees and sunny!  What a fabulous day to do fabulous things and on the fabulous occasion of the landmark TENTH Scholar Awards Ceremony for the Pittsburgh Chapter of the Carson Scholars Fund!  In the hall of the East Club Lounge area of Heinz Field, home of the Pittsburgh Steelers Football Team, the 91 new scholars and 152 repeat scholars from Ohio and Pennsylvania marched in to the triumphant musical fanfare. Read more.

Jerome Bettis Among Those Elected Into Pro Football Hall of Fame Class:

Congratulations to Jerome Bettis, former Pittsburgh Steelers running back, on being elected into the Pro Football Hall of Fame on Saturday, January, 31, 2015! Bettis is a CSF Honorary and Pittsburgh Chapter Board Member. Read more. 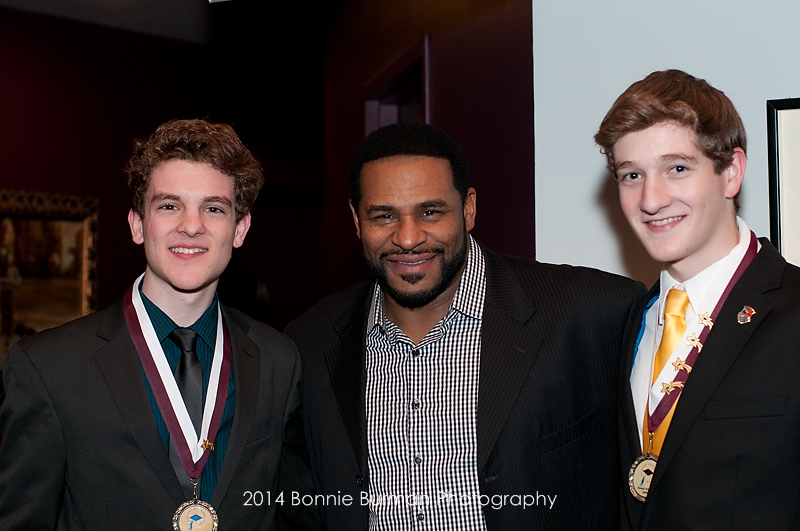