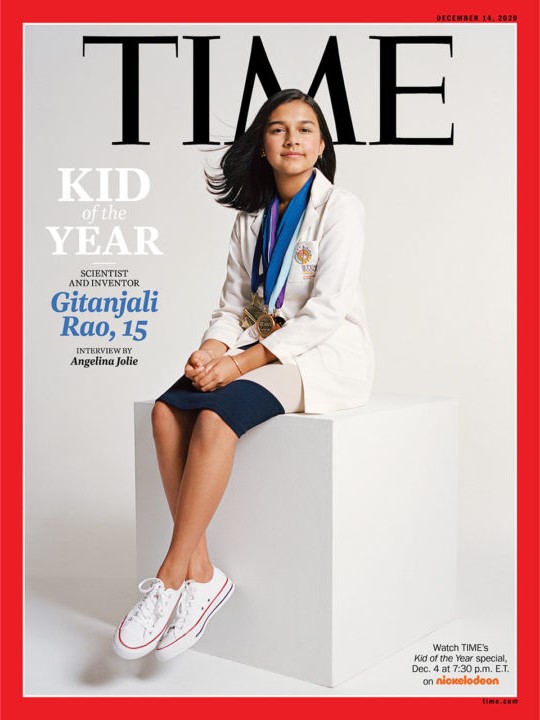 At the age of 15, two-time Carson Scholar, Gitanjali Rao is securing her place in history.  On Friday, December 4th this student scientist and inventor wunderkind was named Time Magazine’s first ever ‘Kid of the Year’, which was no small feat considering there was a field of 5,000 extraordinary applicants.  Colorado resident Gitanjali Rao first came to the Carson Scholars Fund’s (CSF) attention when she was named a 2019 Carson Scholar sponsored by CSF supporters Gerard and Maria Giordana.  The Carson Scholars Fund aims to identify and reward our country’s future leaders.  Gitanjali submitted an impressive application and the judges were awestruck by her work, at the age of 12, in creating a portable device that detects lead in water faster than other techniques.  Since then, Gitanjali has blazed a trail by using artificial intelligence and creating apps to solve issues with cyberbullying, opioid addiction, and other social problems.  Some of the awards and accolades Gitanjali has received include being recognized as a “2019 Forbes 30 Under 30” and Named “America’s Top Young Scientist of 2017” by the Discovery Education 3M Young Scientist Challenge.  While reflecting on the CSF, Gitanjali shared, “The CSF has enabled me to be motivated and excel in my academics while contributing time to our community. Our generation is growing up in a time where we are seeing problems that never existed before. CSF is developing leaders of tomorrow who not only excel in education but give back their time and solve others’ problems ensuring there is a world where kindness prevails.”