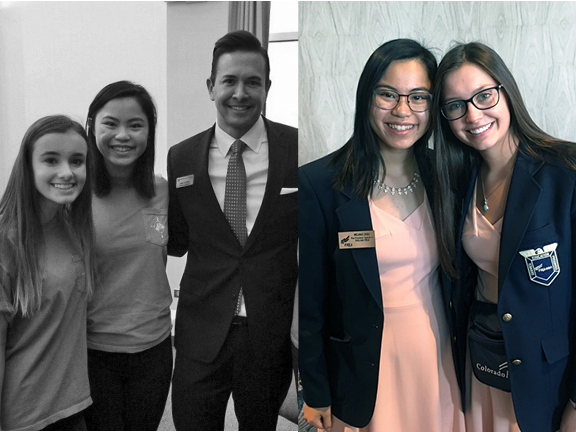 Sometimes all we need is to start a conversation.  Melanie Zhou, a 2019 Carson Scholar, and the other students of ThunderRidge High School in Highlands Ranch, Colorado were faced with several tragedies, leaving the community off-balance, struggling with figuring out how to pick up the pieces. These issues took a toll on their mental health which prompted Melanie to create a unique initiative to address the concerns.

Melanie, along with her entire school community, faced devastation after losing a classmate to suicide and her principal to cancer.  However, through this experience, Melanie found the motivation to change an issue that deeply affected everyone around her.  That’s when Melanie, along with her friend and partner, Mia, created Oasis, a non-profit organization that destigmatizes mental health conversation, generates funding for mental health services and builds physical “Oasis” safe spaces for students struggling with mental health.  Within six months of these tragedies striking her community, Melanie and her co-founder opened the first physical Oasis space at ThunderRidge High School and negotiated with their school superintendent to expand their reach across the district.

While she had the knowledge and passion to create Oasis, perhaps the greatest barrier was financial resources.  Melanie and Mia knew that building these safe spaces for youth would require money.  Using her business knowledge from her high school classes, Melanie formulated a business plan to kick start Oasis.  The plan was to sell merchandise and invest 50 percent of the profits back into the program to create her school’s “Oasis” space.  Over the course of several months, while simultaneously planning and designing the physical Oasis space, merchandise sales brought in over $3,000 in revenue.  At the same time, Melanie turned to grant writing to secure additional funds for her project.  After a competitive grant process, Melanie received a $10,000 grant from the Fight Back Foundation, providing Oasis the seed money to turn ideas into reality.  The grant also provided the Oasis team with mentorship and support as they set out to change the culture in their school and local community.

As co-founder of Oasis, Melanie runs the operations of the company, advocates for mental health funding and research, and cultivates strategic partnerships.  Over the last year, Melanie and Mia have established partnerships with Mental Health Colorado, Douglas County School District, and the Fight Back Foundation.  The Oasis team also now appears at many Colorado events to speak about mental health.

Through the creation of Oasis, Melanie has learned that anyone can initiate change, no matter their age.  She considers her greatest achievement that Oasis has created a community of positivity and strength even though unspeakable things have happened.

In addition to Oasis, Melanie has many interests and hobbies and has received numerous accolades for her academics and humanitarian work.  In her spare time, she enjoys fencing, journaling, watching movies and listening to music.  She also represents over 6,000 students across the state and organizes leadership conferences as the Colorado Vice President of Education for the Future Business Leaders of America.  Melanie is a recipient of both a gold and silver Presidential Volunteer Service Award, and she is bi-lingual in English and Chinese.  She considers receiving the Carson Scholars Fund scholarship her greatest academic achievement because to her it serves as recognition of her hard work and a reminder that anything is possible, something that she will keep in mind next year as she applies to colleges.

Melanie’s goal for the future is to pioneer neuroscience biotechnology.  Creating Oasis introduced her to the intersection between neuroscience and psychology, and she hopes to use neuroscience to illuminate the unknowns in mental health.  Melanie plans to use the skills she’s developed in high school, including her business and science knowledge, to spread inclusivity, compassion, and positivity in any industry or career that comes her way.

Melanie’s scholarship was sponsored by the Carson Scholars Fund.