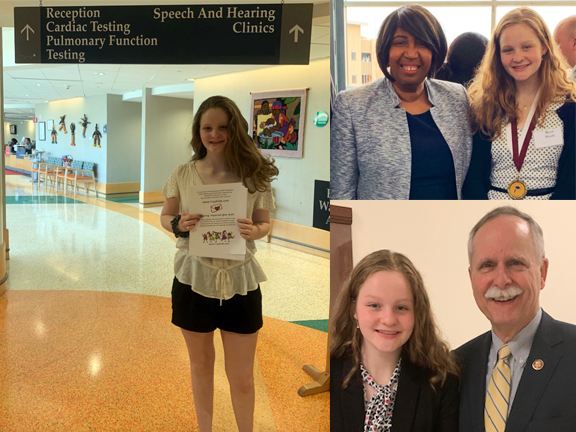 Despite hearing impairments being the most common birth defect, affecting three to four of every 1,000 newborns, there seems to be a lack of resources. Children born with hearing impairments are more likely to face problems such as bullying, social isolation and educational challenges. Thirty percent of children with a hearing impairment leave school functionally illiterate, decreasing their chances of employment and independent living.

Ryan Brady, a junior attending Hathaway Brown School in Shaker Heights, Ohio, saw these statistics and was alarmed. In 2017, she created HippKids. HippKids stands for Hearing Impaired Pen Pals. It is a certified nonprofit dedicated to providing hearing impaired children and teens worldwide resources to help improve their literacy, communication skills and educational outcomes. This pen pal program address two issues at once. By connecting pen pals together, it gives children a space to practice their social skills all while developing their literacy skills. This in turn builds self-confidence among students, and can improve their overall educational development and life outcomes.

Ryan got the idea from her own life experiences. She has an older sister who was born deaf. At a young age, she was implanted with two cochlear implants and endured hundreds of hours of Auditory-Verbal Speech therapy. Growing up, Ryan and her sister spent their time passing notes back and forth to communicate. As they got older, Ryan saw firsthand how her sister’s hearing impairment affected her friendships and social skills. She hopes that by connecting others who share the same experience, they are able to break that feeling of social isolation.

Being the founder of a nonprofit is no easy feat. Ryan is constantly on the move to spread the word about her organization. She spends her free time visiting clinics, attending conventions, and maintaining the HippKids website. The process is fairly simple on the user’s part; they provide some basic information about themselves on the website, are added to a database, and then set up with a pen pal. They are encouraged to introduce themselves in a fun way, including information like their favorite book, a creative poem, or an interesting story. Ryan’s job is a little more complicated. She has to organize all aspects of the pen pal process, from sign ups, to confirmations, to matching pen pals, to sending their welcome letters.

With the little free time she has left, Ryan is also in the process of seeking grants to further her program. HippKids has already connected over 100 children and teens across five different countries, and Ryan’s hope is that it continues to grow. She is also looking to create partnerships with other organizations that share the same goals. Eventually, Ryan aspires to host events for hearing impaired children to meet and form new relationships in a safe and welcoming environment.

Ryan plans on studying government, public policy and economics in college, with the goal of pursuing a career in law. She believes that a great way to bring about change is by directly addressing the public policy. Ryan is also a dedicated member of her school’s debate team, cross country team, and leads the philanthropic organization that fundraises and grants money to nonprofits all over the world. Ryan comes from a large family of military veterans, so she devotes time to fundraise for scientific research for veterans, especially individuals who are paralyzed. She participates in politics by interning with her local city council, and founded a politics club called Junior State of America to promote public service and civics. She enjoys drawing, printmaking, and traveling.

Ryan’s scholarship was sponsored by the Carson Scholars Fund.