Palm Beach Public Elementary School was the first public school built on the island of the city of Palm Beach, Florida!  And the year 2021 marked the school’s 100th anniversary (1)!! Last year, Covid restrictions prevented celebrations, but the school and community found another way to celebrate! 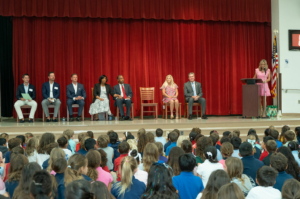 The opening of The Ben Carson / Think Big Reading Room in Palm Beach Public Elementary in 2022 was the first installation of its kind on the entire island! The room filled with award-winning books to enhance the education and help motivate young people to become life-long learners is a special initiative of the Carson Scholars Fund (CSF) that over 250 other schools across the country have embraced!

At the gathering in the cafetorium, the school’s string quintet preceded the program by serenading everyone with an excerpt from Handel’s Water Music!

Once Principal Christie Schwab ascended to the podium, she officially started the program by offering a very warm welcome to all and thanking those who contributed to the establishment of the room.

Among the distinguished guests were Palm Beach County superintendent, several school board representatives and other school officials and community leaders. Also, as in some of the other reading room openings, the city mayor was present. But, and here’s another first, not only was Palm Beach City Mayor Danielle Moore in attendance, but Palm Beach County Mayor Keith James as well took time out of his day to support the efforts to enrich the educational experience of these young citizens of our country!

The Pledge of Allegiance was then led by 5th-grader Maxim Mezentsev and Eve Oyer, a 3rd-grader and 6th-generation native of Palm Beach County, 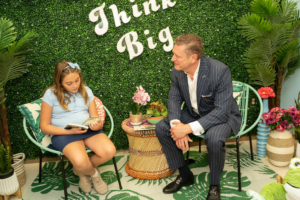 whose great great great grandparents moved here in 1872, 150 years ago this year. Eve is the 4th generation of the Oyer family to attend public schools here because there were no schools prior (the first generation of her ancestors were home schooled). Her father, Harvey Oyer III will appear later on in the program.

“Open a book,” the popular poem by Jane Baskwill, was then impressively antiphonally recited by 4th graders Leila Gonzalez and Nell Mercer.

Award-winning author and attorney Harvey Oyer, III followed, speaking on behalf of himself and the other sponsors, Cody Crowell and Rob Frisbie, Jr.  Continuing on about the importance of education, he cited reading in particular as a springboard to success!  His surprise was a formal announcement that after the room opening that day at Palm Beach Public, SIX MORE reading rooms would be opening in the near future! And here’s another first… the donors for all 7 of the reading rooms were physically there in support!  His comprehensive introduction of Dr Ben Carson brought the former Secretary of Housing and Urban Development to the podium. 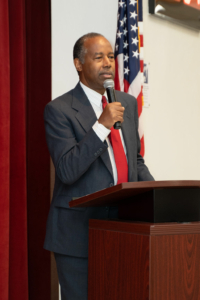 Dr. Carson began by speaking of the American dream, noting that America is the only country with a dream! As a citizen who was able to fully experience that dream, he shared his incredible journey from humble beginnings to becoming a world-class neurosurgeon. Speaking about some of his more challenging neurosurgical cases, one had a particular application that the kids could relate to. A little girl from Connecticut who started having seizures when she was only 8 or 9 years old, ended up at Johns Hopkins, because there was no other hospital at that time that had a procedure to cure her. In the dramatic story, she had half of her brain removed. And it was the half where logic is processed. Although she recovered after the surgery, she and her parents were still quite concerned, because they wondered how well she would do in math. Over the course of the next year, the little girl studied so hard that she was at the top of her math class with only half a brain! At this point, Carson asks the students, “so what can you do with a whole brain and a little determination!!

Dr. Carson then asked his wife and co-founder of the CSF, Candy Carson to share more about the rooms to which she complied.

Principal Schwab then called the members of the reading room committee to the stage, and described each one’s unique part in the establishment of the special room, presenting them with a bouquet or floral arrangement as thanks. She also presented special gifts to the founders as well as the sponsors of the room before dismissing the well-behaved students.

The final reflection was presented by Superintendent Michael Burke.

Guests were ushered over to the other building where the room was located. With so many dignitaries present, it took awhile for all the photos before the room was opened. But with the countdown from 5-1, and Eve and her dad plus a few others with their hands on the scissors, the ribbon was cut and the room was now officially open!! 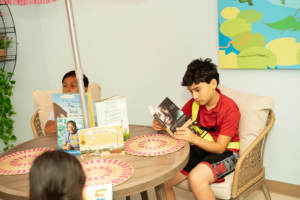 !  A pink and white vertically striped canopy over the ‘Think Big’ Erase board situated over rows of sand-colored, nautically themed bins of books, brings to mind visions of fun tropical treats…thirst-quenching popsicles… ice cream cones with sprinkles…and chasing waves as they chase you back!

In the far corner, the wall with grass growing on it, cultivates the idea of ‘thinking big’ as flowers cascade from the ceiling in shades from rose to white!

Art teacher, Mrs. Jennifer Petti shows the mural she and her husband discovered and used as the inspiration for the rest of the tropical room!  Kid-sized pillowed wicker furniture and tubed-frame patio chairs are strategically placed around the area between tall (but not-too-tall) bookcases bursting with books!!

Circular placemats on the pink-fringe-umbrella’d table welcome students to a setting where generous portions of adventures are served, with so many choices on “the menu,” they thrill just about any tastes!! 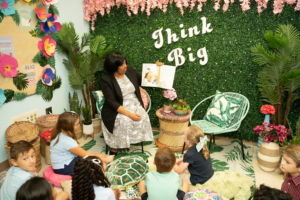 Reading buddies (stuffed animals) reflect the natural fauna of the Florida island, and include a beautiful olive-green turtle, a pair of multicolored owls: mentor- and mentee-size, and a 3-1/2-foot-long soft alligator perfect for a couple of students to relax on, and share a book, or read independently!

Perched in a basket, is a large, bright green frog awaiting his turn to be read to!  Braided, multi-hued circular rugs, grass rugs, ferns in urns, and other tropical accents round out this “paradise for perusing periodicals” … and non-periodicals!!

The reading rooms are part of a unique initiative of the Carson Scholars Fund to maximize the potential of all students by motivating them to learn to love reading and increase their comprehension levels so they can have a better future.