A sunny Friday in southern Florida found another gymnasium all a-buzz with excitement! Boca Raton Elementary, the oldest elementary school in that area, was opening a new Ben Carson Reading Room. 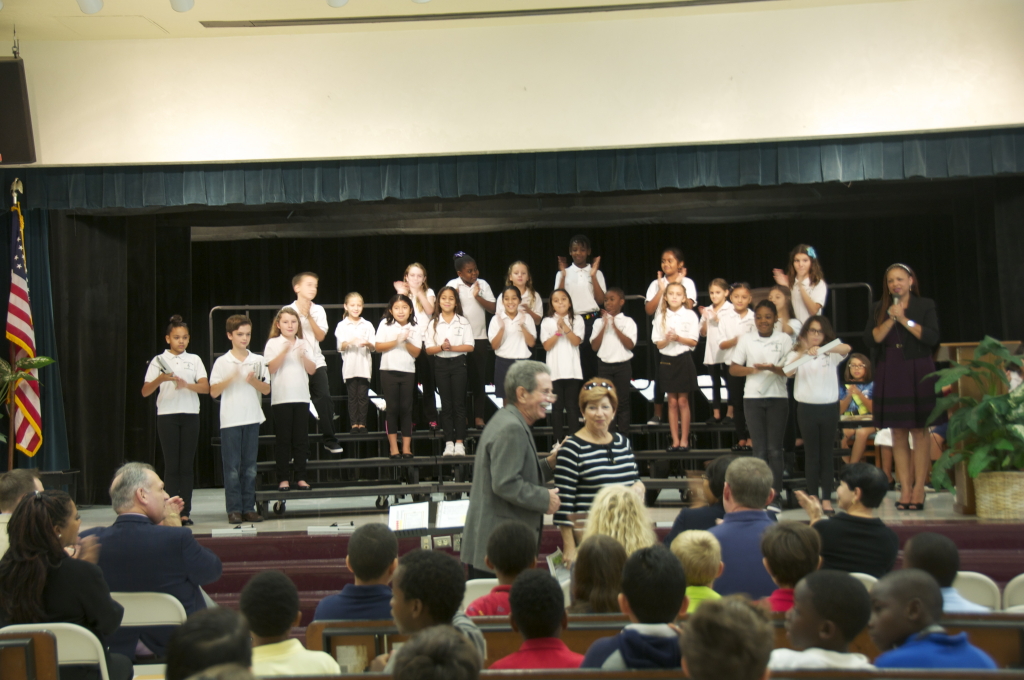 Cafeteria tables converted to high-backed bench seating for students populated the rear, while folding chairs situated closer to the stage were there for the invited guests, staff and volunteers.

Principal Renee H. Elfe opened the program with a very warm welcome, while introducing several special guests, including Deputy Mayor, Robert Weinroth, school board member Frank Barbieri, sponsors Dr. and Mrs. Donald Janower, Mr. and Mrs. Scott Lamberson who donated books, police officers, staff, teachers and representatives from the Carson Scholars Fund which were Mrs. Jessie Monteleone, Mrs. Linda Stoch and Mrs. Candy Carson. She ended her section of the program with a confident announcement that the remainder of the program would be presented by the students.

The Pledge of Allegiance was led by fifth grade student, Chloe Kreuz. The rest of the program was emceed by Katherine Dejo, also in 5th grade.

After Mrs. Candy Carson brought greetings from nearby West Palm Beach, she urged the students to thank all the people who cared enough about them to establish the special reading room and shared comments on the power of the brain. This included a story about one of Dr. Carson’s hemispherectomy patients. The 10-year-old girl from Connecticut, who had half of her brain surgically removed for the purpose of curing intractable seizures, did not allow that to hinder her academic achievement.  The year after her surgery she worked so hard she became the top math student in her class, and she did that with only half of a brain!

The cheery Eagle singers, directed by Leise Connell, were approximately 30 in number all dressed in white polo shirts over dark skirts and slacks. The first song they presented began with the low voices chanting, “read, read, read, read” and had fun lyrics, such as “when a book is all open…you can fall in…and be buried in stories right up to your chin.”

The Eagle Chime Ringers accompanied the singers each held pale gray rectangular tubes with small balls attached to thin arms which when jerked in the air made the sound of bells.  The last song, “Simple Gifts,” was performed solely by the Chime Ringers and was selected in gratitude for the gift of the reading room. 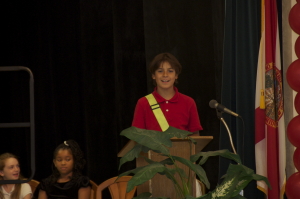 Next, three Poetry readings took the spotlight. The first was a fifth grade student, Matthew Morales, and read his work entitled “Library Book” by Amy Vanderwater. He concluded with the thought that after spending an exciting time in the library, they would head home, “my mother, book and I.” Serenity Newson, a fourth grade student, shared “Open a Book” by Jane Baskwill, which began “Open a book and you will find…people and places of every kind!” Third grade student, Abby Price, presented “Dreams” by Langston Hughes, which encouraged readers and listeners to “Hold fast to your dreams.” 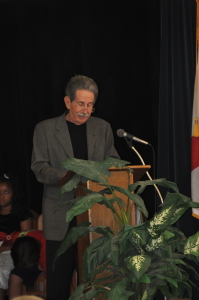 Afterwards, Dr. Janower then took to the stage. He began his remarks by describing his relationship with Dr. Carson, as he was his mother Sonya’s physician when Ben was a child. He even performed outpatient surgery on Ben when he was a youngster.  He recalled Sonya to be a very determined mother whom he said some of his coworkers dreaded interacting with. As she tried to inspire her children, she would often use this quote “Do your best and let God do the rest,” one that could be utilized even today. Dr. Janower conveyed that he and his wife enjoy encouraging future generations by sponsoring these reading rooms. (This reading room makes the sixth one that he and his wife, Barbara who is a former school teacher, have sponsored.)  He ended his remarks by saying, “Reading rooms will provide opportunities and the keys to your future!”

Dr. Carson’s video followed. In his description of his work, Dr. Carson spoke of long surgeries that were worth the time and energy because they would result in either a longer life or better quality of life for that patient. It was hard work, but he appreciated having the opportunity to help children with medical problems, often being their only hope. He also shared how and why he and his wife started the Carson Scholars Fund and dedicated themselves to helping students to develop themselves. When he was younger, his mother encouraged him to read. He intoned, “What a difference it makes when you change your opinion of who you are and what you can accomplish as you read more.” He discovered from reading that the person who has the most to do with what happens to you….is you! In conclusion, he said, “Magical things can happen when you open a book! Don’t forget to read every day, and always THINK BIG!”

Assistant Principal Jordan Barenburg closed the program, relating to a story of when he was in fifth grade and Steinbeck was the author who opened his world to global insights that only books can give. He was thankful that the names of Dr. and Mrs. Janower and Dr. Carson will now be permanent residents of Boca Raton Elementary and also was very appreciative of those who worked behind the scenes: 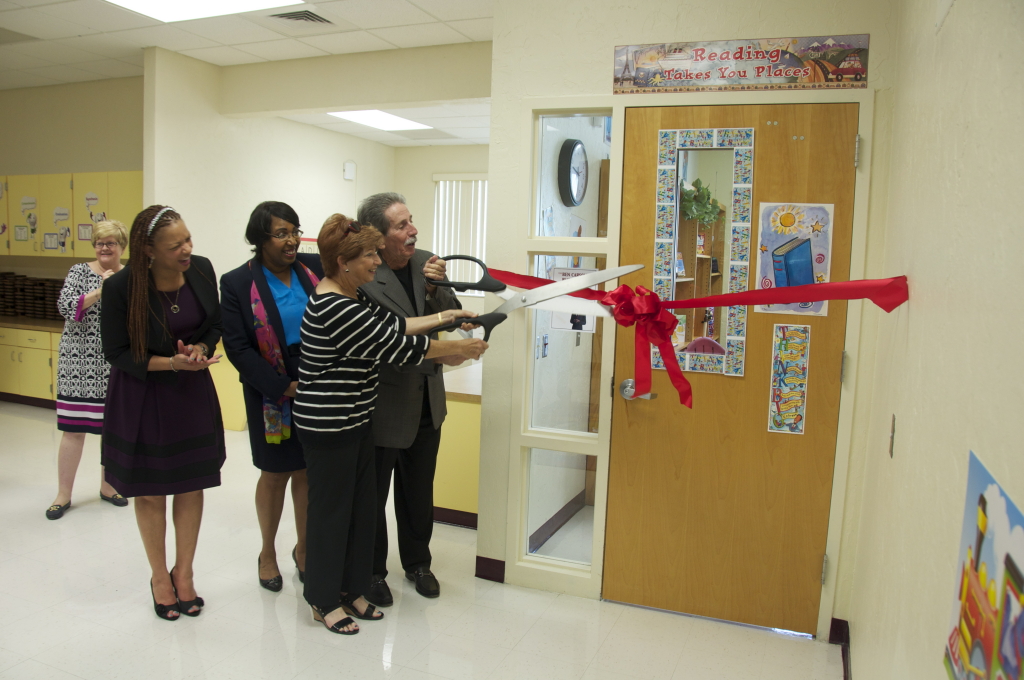 With a final thank you to other special guests who came from the area office, the audience was moved to the library for the actual opening. 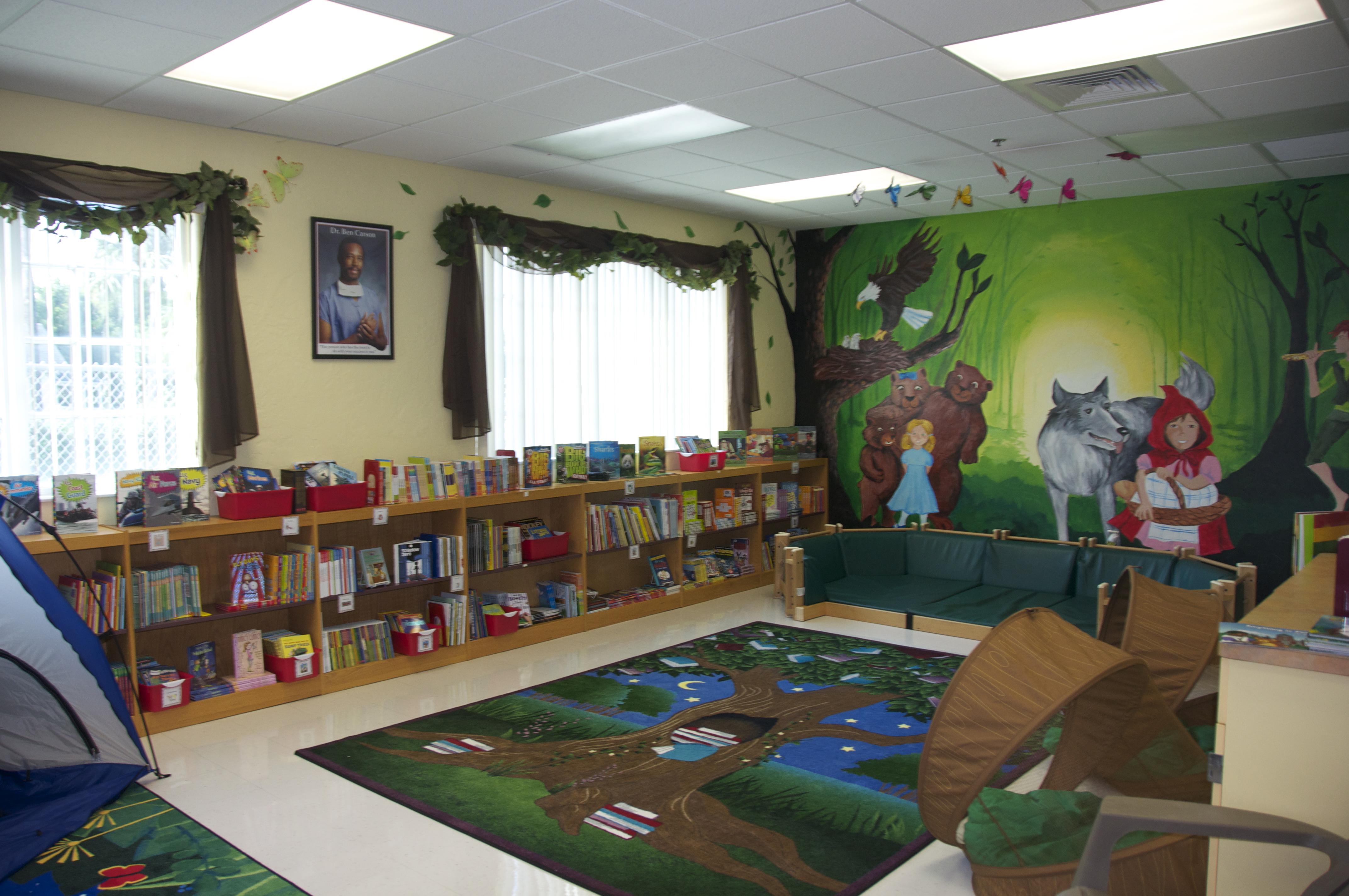 As you enter the room, you step on a large carpet that could have been inspired by Van Gogh’s Starry Night. The field of the carpet is a rich, deep blue with various-sized sparkling stars and the border is composed of varied exotic plants and flowers. Perhaps this was selected to remind students who would recognize that much dreaming is done at night and that whatever they might dream is actually within reach. 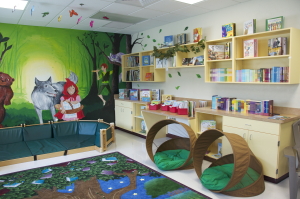 The other large carpet that dominates the room has a huge learning tree as its primary subject. There are books everywhere…amongst the branches, stacked in several piles near the roots of the tree, as well as taking up residence in a tree hollow that would normally be occupied by squirrels!

The floor to ceiling wall mural welcomes readers with popular fairy tale figures like Goldilocks and her three bear friends, Peter Pan, Little Red Riding Hood next to a huge wolf, the Cheshire Cat and in homage to their eagle mascot, a mother is coming in for a landing on the nest with two fledglings. 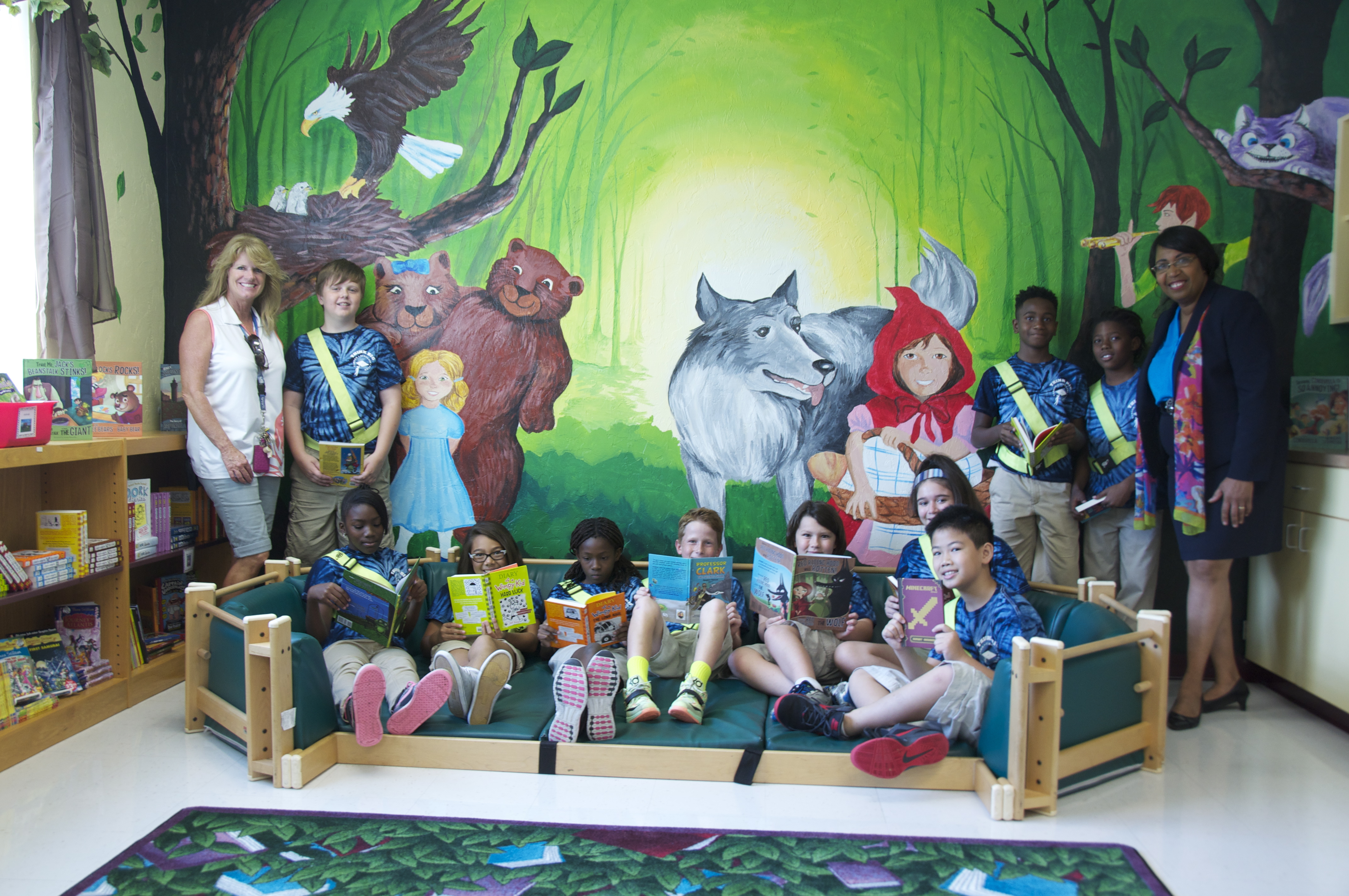 Butterflies on the ceiling and walls help students consider that thoughts can be lifted to soar and take flight in any way you can imagine. 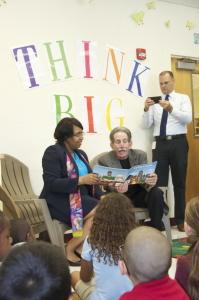 The outdoorsy feel is continued with a fishing pole, oil lantern, heavy duty flashlight, canteen and hiking boots on the bookcases amongst a treasure trove of books. The bark-colored, cubby-branch seats with leaf-shaped pillows near the red and brown Adirondack chairs are perfect for students to relax in with a favorite story.

Special thanks to the talented muralists, who happened to be twin brothers, Christopher and Thomas Duhart.

The reception was a wonderful complement to the special room. Offerings on the tastebud-ticklers table included deviled eggs, croissants, red velvet mini-cupcakes with cream cheese icing and red sprinkles and a brie cheese wheel with conserves on a fruit tray. Guests quenched their thirst with mixed-fruit-infused water.

Special thanks to Dr. and Mrs. Donald Janower for sponsoring the reading room.