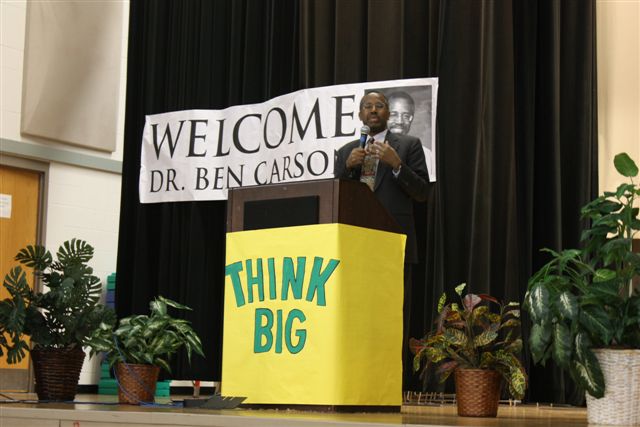 On January 22, 2007 Dr. and Mrs. Carson and dedicated faculty from St. Louis University attended a press conference and ceremony celebrating the opening of 8 Ben Carson Reading Rooms in St. Louis Elementary and Middle Schools.  Gateway Middle School for Science and Technology was proud to be one of those schools.

In December 2012 , the Carson Scholars Fund issued a challenge to all of the St. Louis Ben Carson Reading Room schools.  The school that read the most leisure minutes would be rewarded with a rare visit by Dr. Carson.  The 482 students at Gateway Middle School for Science and Technology rose to the challenge and logged over 24,000 minutes of reading in a five week period.  This past Friday, January 27, 2012 Dr. and Mrs. Carson made good on their promise by visiting the school.  The visit consisted of an all-school assembly, where Dr. Carson shared his insight and philosophy on learning, success, and life.  Below is Mrs. Candy Carson’s event commentary:

The modern, open design is what you first notice about Gateway Middle School for Science and Technology in St. Louis.  As the Carsons and Dr. Mike Railey, Associate Dean of St. Louis University Multicultural Affairs were escorted by several well-mannered, intelligent students to the gymnasium, the two-story view of the courtyard and it’s unique art caught their attention.  Hugging the school are several brightly-colored 30-foot-high geometric structures, each divided into squares similar to a Rubik’s cube:  a royal blue pyramid, a green sphere, a yellow cube standing on end, and a 15-foot-diameter red cylinder with a sloping top!

Around 500 students, educators, and community friends had gathered to hear Dr. Ben Carson speak in the multipurpose gymnasium/auditorium on Friday.  He cited his hatred of not spiders or snakes, but of poverty as a significant motivational factor to study hard and develop himself so that he could escape that environment.

During the Q & A period, one question was “What aspect of your success makes you the happiest?”  He responded with musings about a large house and nice cars, but concluded that the thing that gave him the most satisfaction is how his life can be used as an example of how people can empower themselves, and we need more students to do this for the health of our nation.

Following the program, as Principal Aisha Grace and the student escorts took guests through the halls of the “hands on” elementary school, we passed an oak rabbit pen, complete with a live white rabbit with black ears!  We were told that there are cages with live animals on each floor (we even saw a snake!), and students vie for the opportunity to take the creatures home over school breaks to care for them!

The Ben Carson Reading Room is housed in the two-story library.  Bordered by full bookcases which are fronted by padded video chairs, students are encouraged to “Chill With a Book” as the entry rug says, that sentiment whimsically captured by pictures of penguins with mufflers above a school of fish, where each fish has it’s own book as it swims along!

The middle school is one of three learning institutions in this complex, which frames the courtyard with an elementary school as well as a school for special needs children. 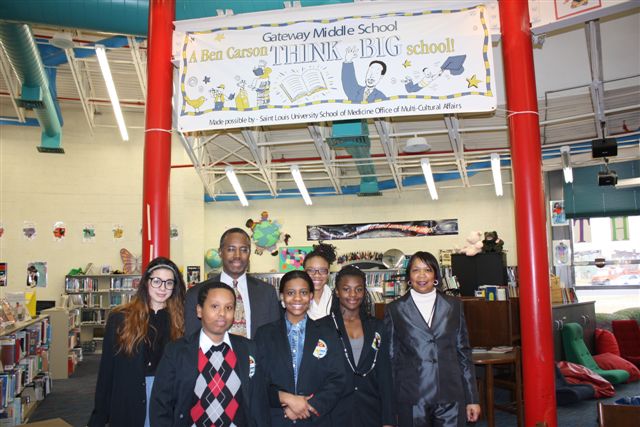 Special thanks to benefactor St. Louis University for making the dream of this Ben Carson Reading Room a reality!