“It’s a great day to be a Jaguar….” – that’s the motto at Jefferson Elementary School. The motto especially rang true on Wednesday, October 17, 2012 – when the school officially opened its Ben Carson Reading Room. While students had an opportunity to get a “sneak peak” of the room when Dr. and Mrs. Carson visited in April 2012, it was nowhere near the splendid grandeur that would greet them on opening day. To mark the occasion, the school held an assembly and ribbon cutting ceremony.

During the assembly students learned about Dr. Carson’s early educational experiences and his THINK BIG philosophy. After the ceremony it was time to unveil the completed room. Now accenting the beautiful mural was comfortable seating, rugs, pillows, and a plethora of books. Story book characters were strategically placed throughout the room, encouraging young students to explore their world. Jefferson Elementary is the third school in the Houston Independent School District to receive a Ben Carson Reading Room sponsored by The Hearst Foundations. Thanks to the generosity of The Hearst Foundations – It truly is a great day to be a Jaguar.

In April 2012, Dr. and Mrs. Carson visited Jefferson Elementary to check in on the progress of their Ben Carson Reading Room. The reading room opened in October and students have been enjoying a good book ever since. 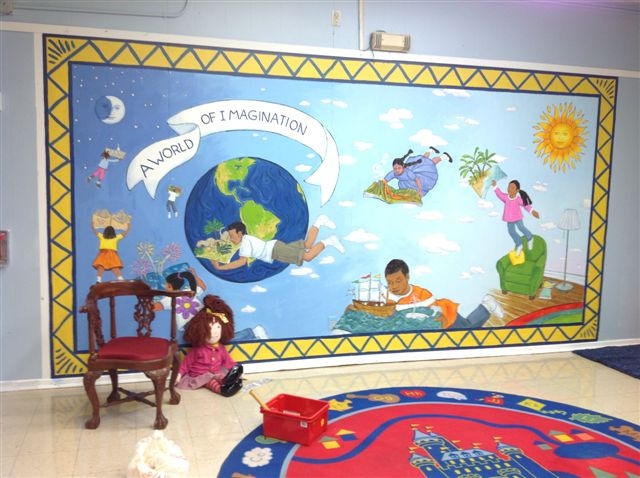 Dr. Carson met with first and second grade students on his visit, where he read a story, and discussed what it is like to be a neurosurgeon.

Jefferson Elementary is one of three other Houston Reading Rooms that will open this year sponsored by The Hearst Foundations. 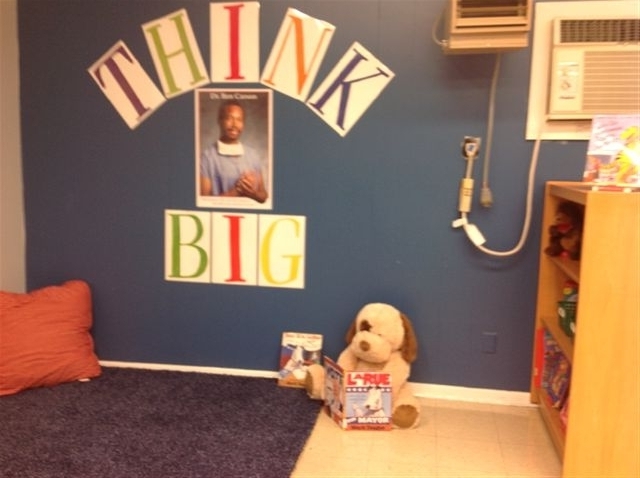 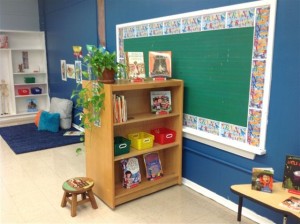 “Thomas Jefferson probably never imagined a school with children flying towards the sky. But the mural on the south end of a temporary classroom building of this name‐sake school gives a visual depiction of reading as an uplifting experience. In each case a youth is actively reading, and each open book has a 2‐dimensional subject, like an erupting volcano, a rocket launch, a 3‐masted schooner near a whale navigating high waves, quietly grazing dinosaurs, etc. creatively chronicling “A World of Imagination” as the incorporated banner proclaims,” said Mrs. Carson.

The reading room has a colorful painting mural by local artist Kay Sarver. Families of the students painted the remainder of the walls. Special thanks to Melanie White and Principal Kerry Hamilton, Kay Sarver and The Hearst Foundations.