The Cafeteria/Auditorium was jam-packed with the full student body sitting cross-legged by class on the floor. Special guests were seated along the sides at the front and there was standing room along the perimeter for the rest! The room was a-buzz with the excitement of the new reading room, but everyone quickly quieted when principal Shannon Henry began. She was joined by students with their customary rhythmic clapping sequence. When she announced “mouths are closed and voices are off ” the students were immediately quiet! 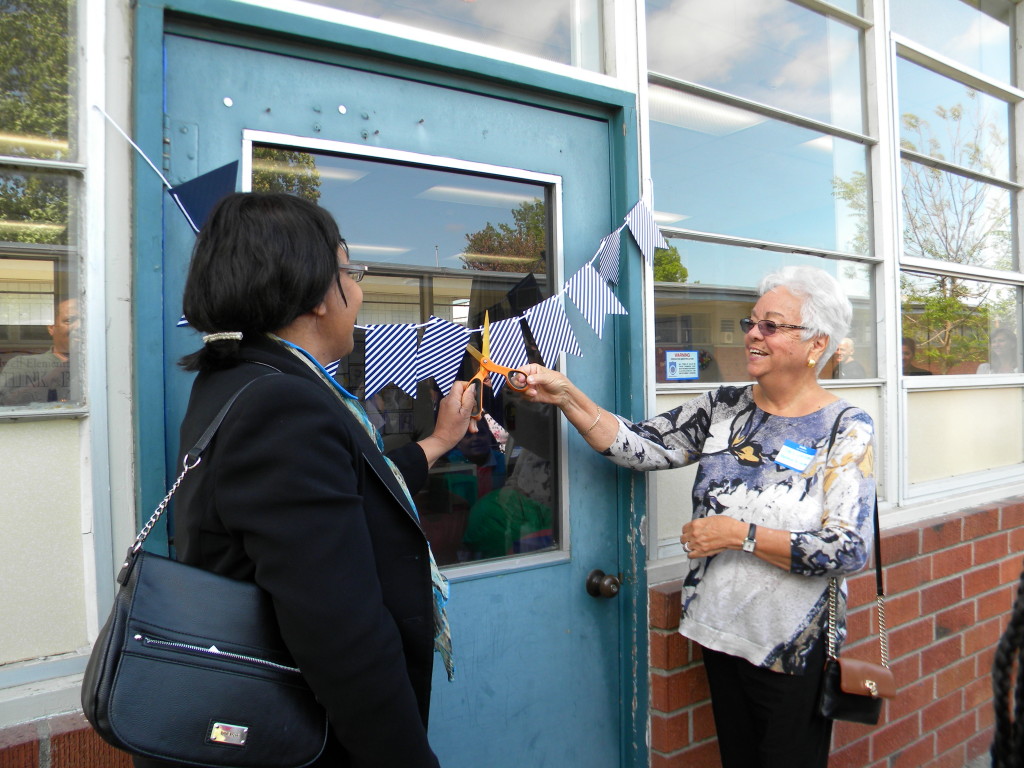 Suddenly the beige curtains on the stage parted to reveal three rows of 2nd grade students predominantly dressed in dark slacks and white or navy shirts. As they sang “This Land is Your Land,” the impact of the song was greatly enhanced by their hand motions and choreography.  Intoning, “As I was walking a ribbon of highway” they marched in step. Afterwards amidst thunderous applause, each row advanced to the front of the stage, bowed together and exited the stage to their seats on the cafeteria’s main floor.

When assistant superintendent, Tu Moua-Carroz, greeted the students with a good morning, the students echoed her greeting enthusiastically in unison. She exclaimed that this is the favorite part of her job, which was getting to see incredible, bright and intelligent children. She proceeded by thanking the sponsors, the Carson Scholars Fund representatives and all who made the special room possible, while also recognizing teachers, volunteers and parents.

This time it was absolutely unanimous when Mrs. Candy Carson asked the students “How many of you ever get bored!” But the students did come up with the cure for that, which they answered by saying, “READING!” Candy continued with amazing facts about our brains and their capacities. The story of one of her husband’s hemispherectomy patients, who worked so hard after her surgery that she rose to the top of her math class with only half of a brain, really created a stir with the students. Her closing remarks included a plea for students to thank their teachers and everyone else who cared enough about them and their futures to establish a reading room for them to explore new worlds. 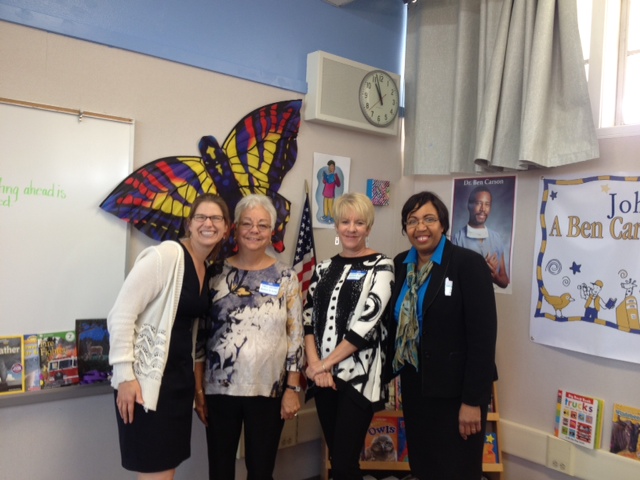 Dr. Carson was displayed on a video, where he expressed his gratitude to the educators who encourage young people to excel academically and develop themselves to help their fellow man.  He continued with how amazing books are in that they can take you places!  “With a book and imagination, you can travel the world and meet new friends!”  Students were cautioned to remember that, “the person who has the most to do with what happens to you…is you!  And through reading, you can become anything you want to be!” After congratulating everyone, he ended with “And don’t forget to always THINK BIG!”

A comprehensive video of all the Sacramento City Unified School District Reading Rooms, accompanied by a soundtrack of “Happy,” started playing. The screen showed the cover of a book magically opening and a few pages turning to start the journey through the 10 Ben Carson Reading Rooms of Sacramento. Spontaneous, unified, rhythmic clapping began as the audience became inspired by the creative beauty of the rooms enhanced by the music!  Parts of the cinematography were even sped up to coordinate with the music. The conclusion of the video showed the final pages of the book magically turning to the left to reveal a page thanking the Richard Lumsden Foundation, with the final page showing “The End.”

Students from 4th and 5th grade classes stepped up on stage holding the letters of THINK BIG in black, mounted individually on poster boards of various bright colors. Each student then read the meaning behind each letter of the acrostic.

The facilitator, Mrs. Merlo, came forward on behalf of the school and said that to show their gratitude, memory books with thank you notes from the students had been created for Mrs. Carson and Mrs. Lumsden. These were presented by students, Christopher Lopez and Sanai Davis respectively, who hugged Mrs. Carson and Mrs. Lumsden respectively as well!

While the children participated in the Character Parade of Books, where they had the opportunity to dress up as their favorite book character on the huge playground, a smaller group proceeded to the reading room to cut the ribbon and celebrate the opening. 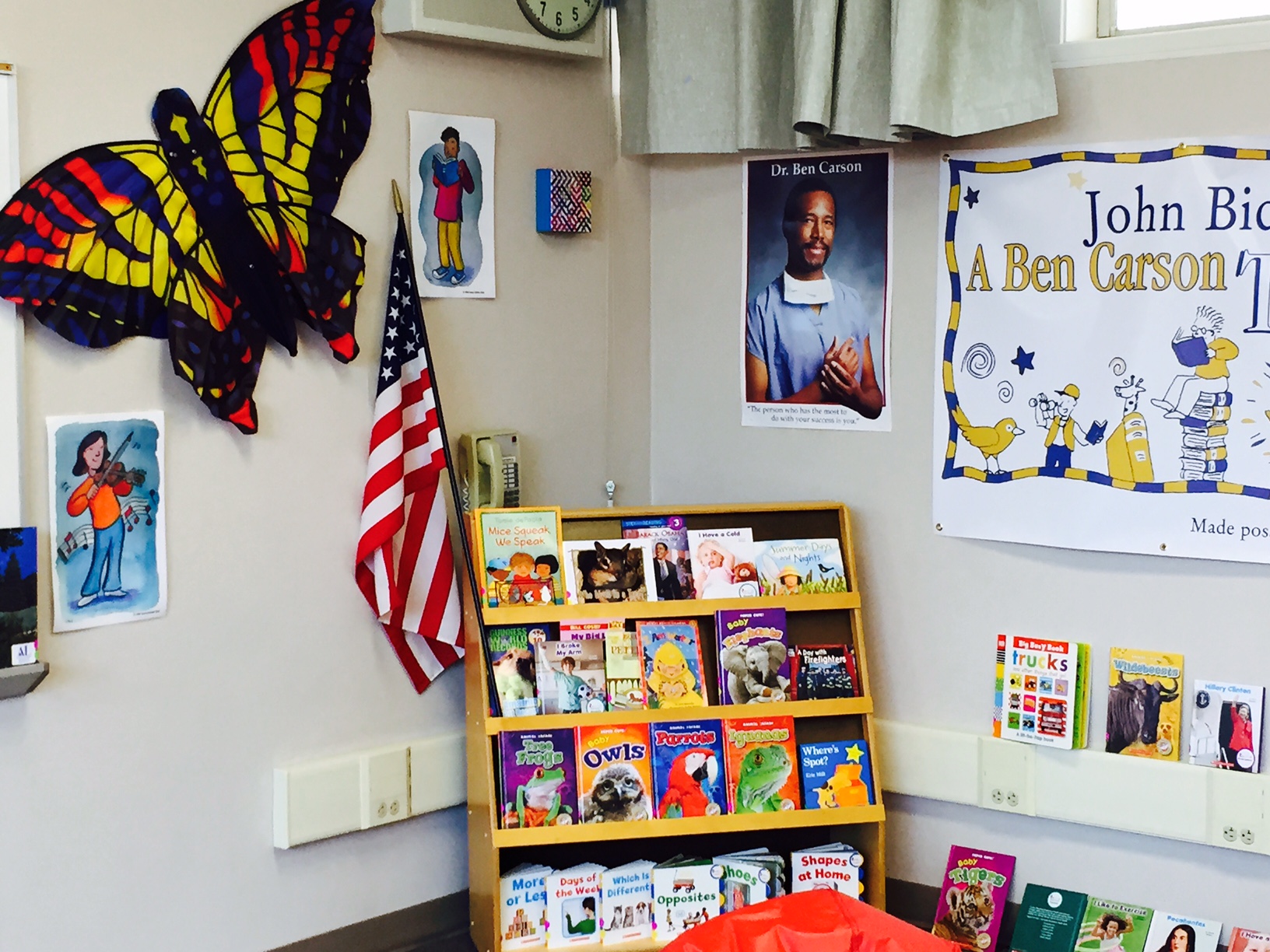 The Room
Entering the 36′ x 26’ room, your first impression is one of space! There was plenty of room for children to relax with their favorite book! Several kid-friendly seating arrangements were placed in the room! Positioned on the edges of a colorful 8-foot oval rug depicting the world, were 5 primary-colored beanbag seats! On the corners of a deep sky blue rectangular rug were orange and red Fatboy ottomans. A bent-wood sliding rocker was made even more comfortable by seat pads and a royal blue popcorn velour throw! Vibrantly-colored molded cubes providing three-way seating were situated around a natural, wood-toned rectangular table. Several red rectangular ottomans against the wall were topped with beautiful red pillows embroidered with birds. 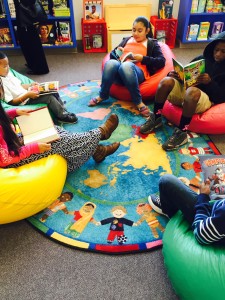 Channels holding books about 2 feet from the floor provided easy access for book lovers to indulge in their favorite pastime! A huge butterfly on the wall encouraged kids to allow their imaginations to fly, while in the opposite corner, blue stars amongst cotton clouds provide the same inspiration with the words “imagine this.” Another corner showcases a quilt that is an arts integration lesson with math, social studies and art with Mrs. Anita & Mrs. Johnson and students from room 17. Near the quilt was a framed painting of a couple dancing the Tango.

Thank you to Mrs. Merlo, Ms. Ward and the many committee members and volunteers who helped to make the special room a dream-come-true for the students!