The rain that started before dawn subsided into a cloudy day. The weather was appreciated by the attendees of the Plymouth Educational Center. The Plymouth Educational Center is associated with Plymouth United Church of Christ, which is currently pastored by Rev. Nicholas Hood, III. Pastor Hood’s mother, Elizabeth, founded the school as a day care center, where they would meet in the basement of the church. The school expanded in 1974 to a day school, was incorporated in 1985, and has grown to 688 students currently serving grades K-8. 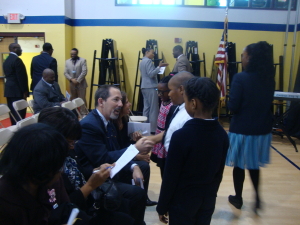 The cloudy day was uniquely brightened not only by the anticipation of the opening exercises, but also by the creative decorations of the organizers.  Fifteen-inch-high golden balloons, shaped to spell out THINK BIG, lined the sidewalk path to the school entrance. Once attendees descended the stairs into the gymnasium, they were given the “red carpet” treatment. They crossed the threshold on a 3-foot–wide red carpet covering the polished wood floor. Each guest was presented with a 5-foot scroll wrapped by a blue ribbon. The front of the gymnasium was adorned with more gold-letter balloons spelling out THINK BIG, framed by several circular balloons in rainbow colors.

Mrs. Kimberly Pritchett, Dean of Academia ELA K-8, opened the program by leading the attendees during the Pledge of Allegiance.

Principal Tareia Caldwell introduced visiting dignitaries from the community, including Detroit Councilmen Andre Spivey and James Tate, District Superintendent Lashonda Thomas, and Title 1 Coordinator for the district Sharon Oliver-Merchant.  She thanked everyone involved in the development of the reading rooms and for providing the opportunity for the students to read an additional 3,000 minutes per day. 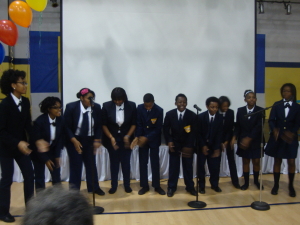 The song “Happy” was performed by The Legacy Club of the 8th grade.  This group of eleven students, dressed in navy suits and white shirts and coordinating ties, approached the microphones by twos or threes. As they approached it, they took turns singing sections of the verses.  The entire group would chime in on the chorus, of course moving with the music and clapping.  Demetrius Nabors of Krayon Productions provided accompaniment on a Casio keyboard. Once the song was complete, the Legacy Club members each shared their view on what happiness meant to them with respect to reading.

Mrs. Carson stated relevant and recent statistics on graduation rates and brain power, as well as how important it is for young people to think about and plan for the future. She then discussed that when the average person in the United States lives to be 80 years old or more, he or she can spend the first 20-25 years preparing themselves or not preparing themselves.  If they prepare, they have 55-50 years to reap the benefits, but on the other hand if they don’t prepare, they have that many years to suffer the consequences.  She concluded her remarks with the story of one of her husband’s young patients who underwent a hemispherectomy. Half of the patient’s brain that was removed was the one where logic is processed. Her concern over how she would do in math spurred her to study so hard that she was at the top of her math class at the end of that year. Therefore, if she can do that with half a brain, Mrs. Carson challenged, “What can YOU do with a whole brain, a little hard work and determination?”

After sharing his gratitude for all the efforts to create the reading rooms, Mr. Jeff Janower spoke about his connection with Dr. Carson. Mr. Janower revealed that his father, Dr. Donald Janower, had been Dr. Carson’s physician when he was about the students’ age.  He said, “…and you knew when Mrs. Carson (Ben’s mother) was there, because she made sure you knew she expected excellence.”  Like Dr. Janower, Dr. Carson believes that education provides keys to success.  In turn, this is why the Janower family provides reading rooms. They believe with these special places, students can be motivated to realize their potential and become the best they can be.

Next, 4th-grader Mariah Edwards recited a poem that was entitled “Books.” It was a literary gem which provided the perspective of an avid reader’s love of the printed page and a desire to have books everywhere! 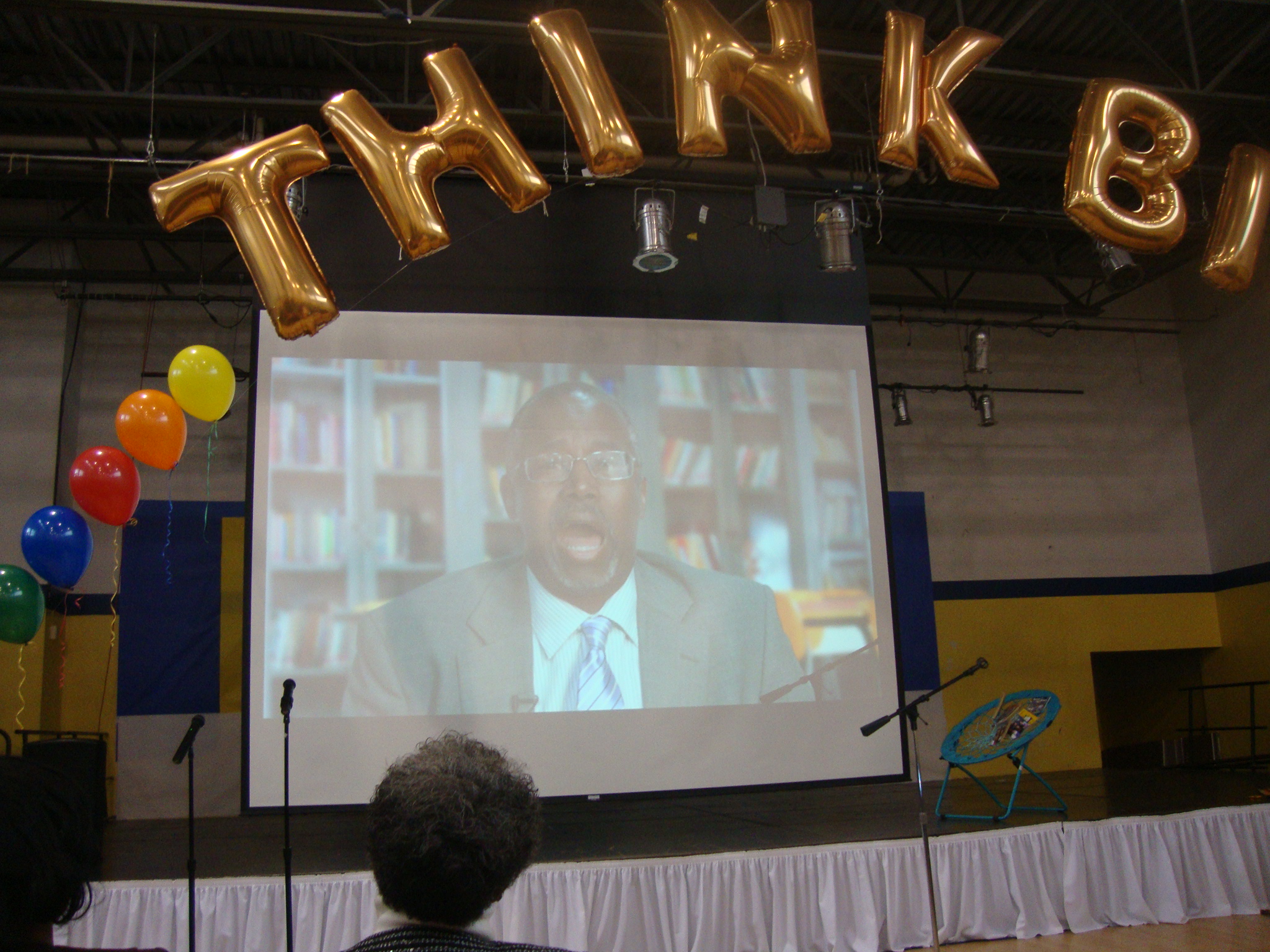 In the message from Dr. Carson via video, he spoke of how one can truly expand their horizons through reading. “The reading room is a very special place where magical things can happen once you open a book. When you read, you can spend time with old friends (Clifford the big red dog, the Cat in the Hat, etc) and meet new friends.” He concluded by asking the students to continue to THINK BIG.

Micah Green & Justin Fowler, both 5th graders, read their personally composed thank you notes in appreciation for the ones responsible for making the room possible.

Just prior to the closing remarks, Superintendent Thomas surprised Dean of Academia, Mrs. Pritchett,  with pink roses for making the dream of the reading rooms come true. Her response was, “You should have done this after my speech,” since she was so touched by the sweet gesture. However, she continued with a calm introduction of the video that had been prepared to demonstrate the progress of the room’s development. Then came the special challenge. She asked the guests to become reading advocates, and fill out the scroll they had received prior to the program so each one could be more involved in developing literacy. Suggested involvement as advocates included: leading a book club, volunteering to read to a child, tutoring in reading, and aiding in the restoration of reading rooms. 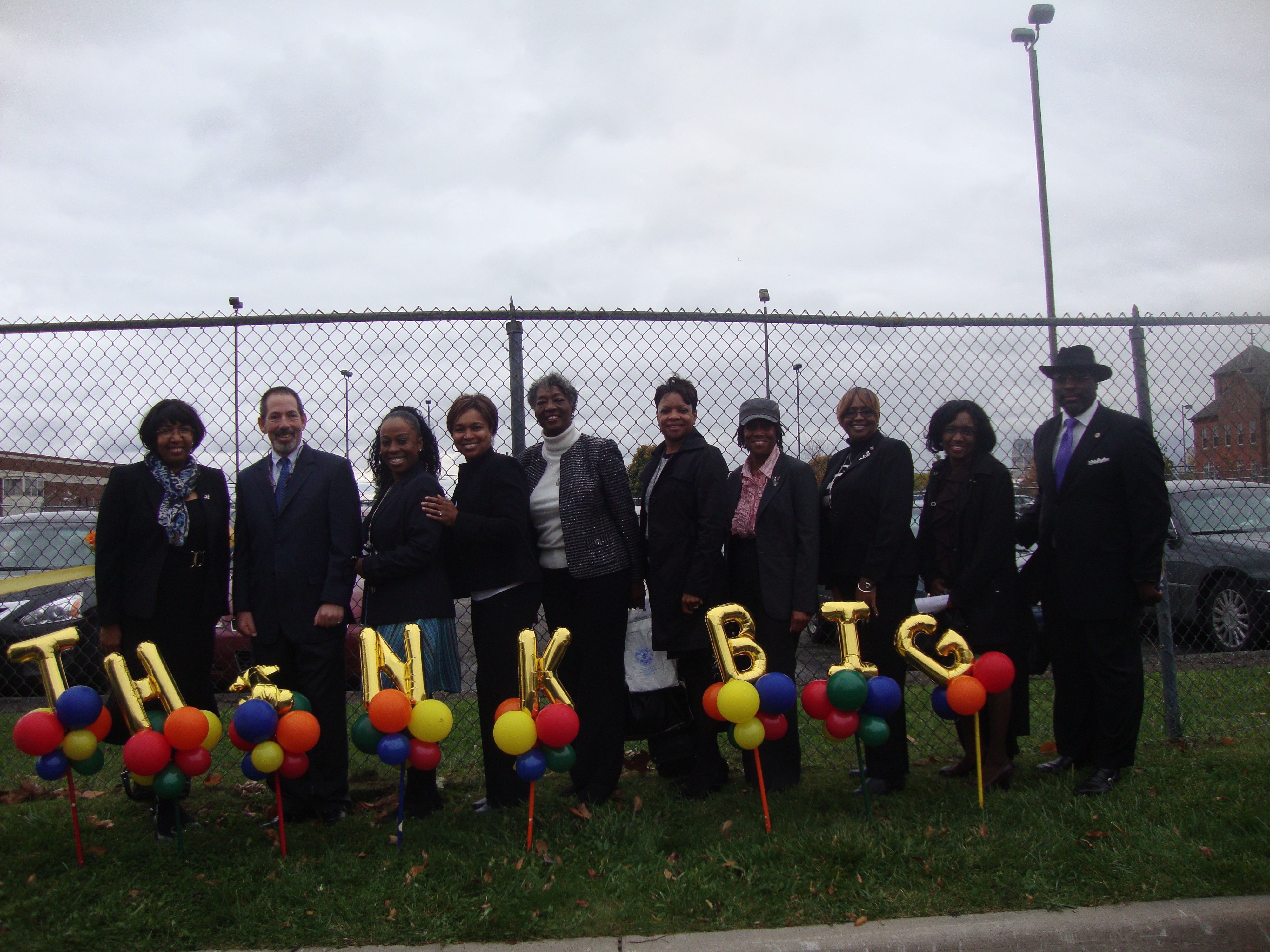 Following Mrs. Pritchett, students sang the PEC Respect song while everyone crossed the parking lot to make their way to the newest reading rooms! 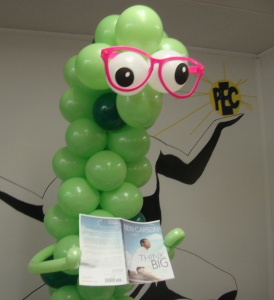 Pausing only for a photo op prior to ribbon cutting with the golden THINK BIG balloons, the guests entered the temporary class module. To welcome all inside, a 6-foot tall bookworm, Ross the Reader, made up of green balloons and wearing glasses, was perched outside. 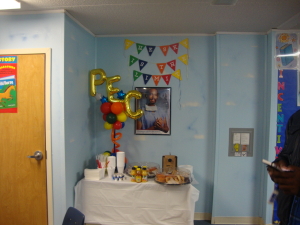 While inside, you get a real feel for the Detroit spirit, especially since a large painting of the statue “The Spirit of Detroit” is in the artwork!  The theme colors are the team colors of Detroit’s pro ball organizations: red, black and white. Another large painting symbolizing unity and peace, with one hand stretching down from the ceiling to clasp one stretching up from the floor dominates another wall. Shelves loaded with books and color-coordinated comfortable furniture are located around the room.  A unique octagonal table with the Detroit letter surrounded by black chairs is centered in this room. Slogans like “Let yourself go” and THINK BIG are exhibited around the room to inspire students. A thank you letter to sponsor, Dr. Janower from the class of 2015 is prominently displayed, as well as the traditional 3-foot-wide Ben Carson Reading Room banner showing that it was made possible by Dr. and Mrs. Janower. 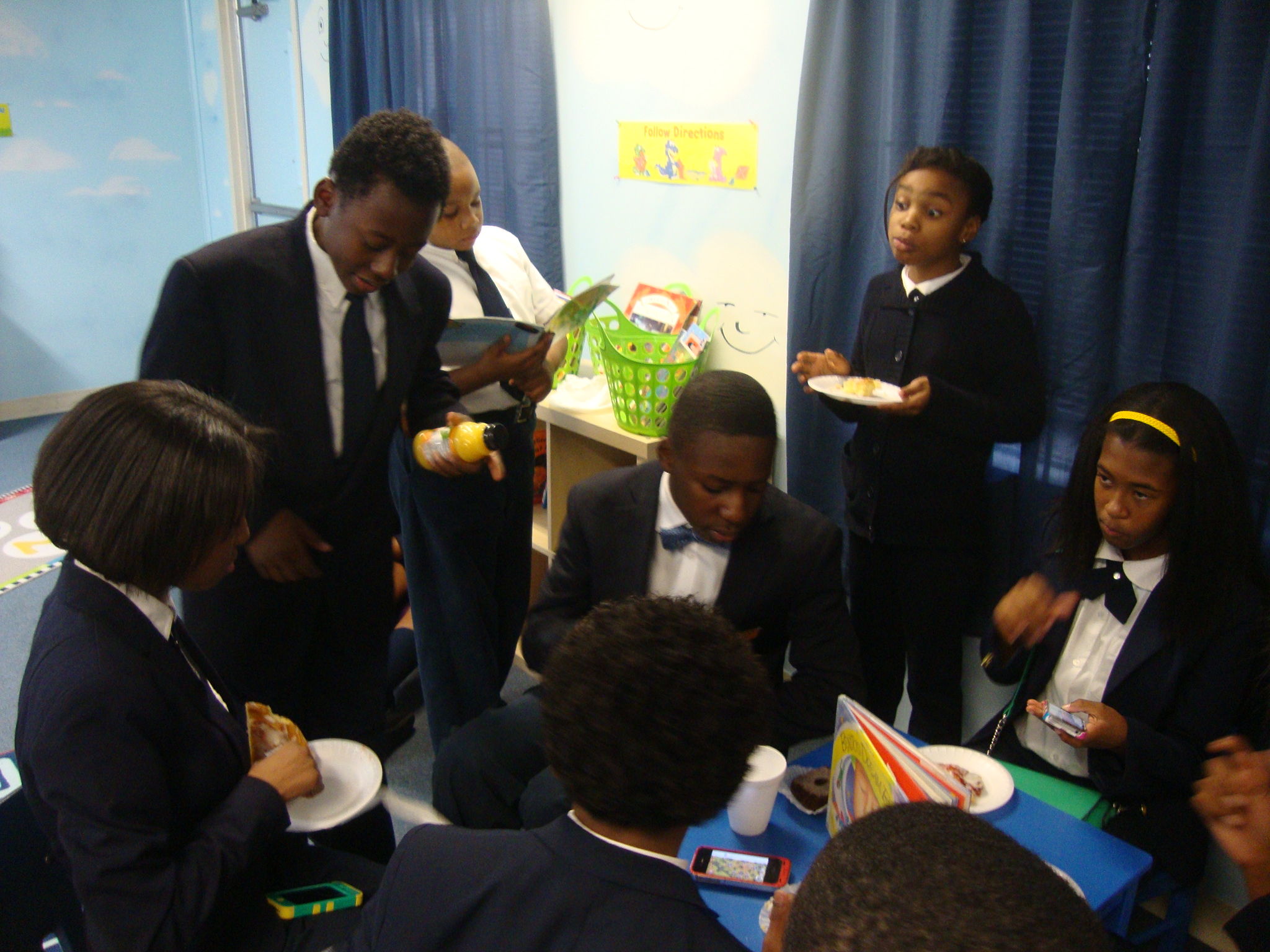 Just past the room was a hallway with two easy-access restrooms on the right. At the end of the hall was yet another reading room!  This one was designed with K-4 students in mind!  And the theme, “The sky’s the limit,” was felt by all no matter where you looked! 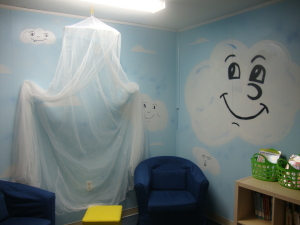 Huge, fluffy, smiling clouds, some as small as a lime, others as much as 4 feet in diameter populated the sky-blue walls. A pointed blue canopy with rainbow colored flaps was attached to one area of the wall, shading two royal blue bean bag armchairs. Two Kindergarten-sized tables, one in red and the other in blue, completed the furniture setting. The floor was decorated with two alphabet rugs with letters large enough to hopscotch on, 2 rugs sporting primary numbers of the same size, interlocking cushiony floor mats in primary colors, and another accent rug in blue with an aviator rabbit piloting a red plane! Again, the phrases to inspire success were in plain sight. THINK BIG is displayed in huge, eye-catching rainbow letters, “Take turns”, and even consonant blends in clouds had their own display above the complete alphabet. 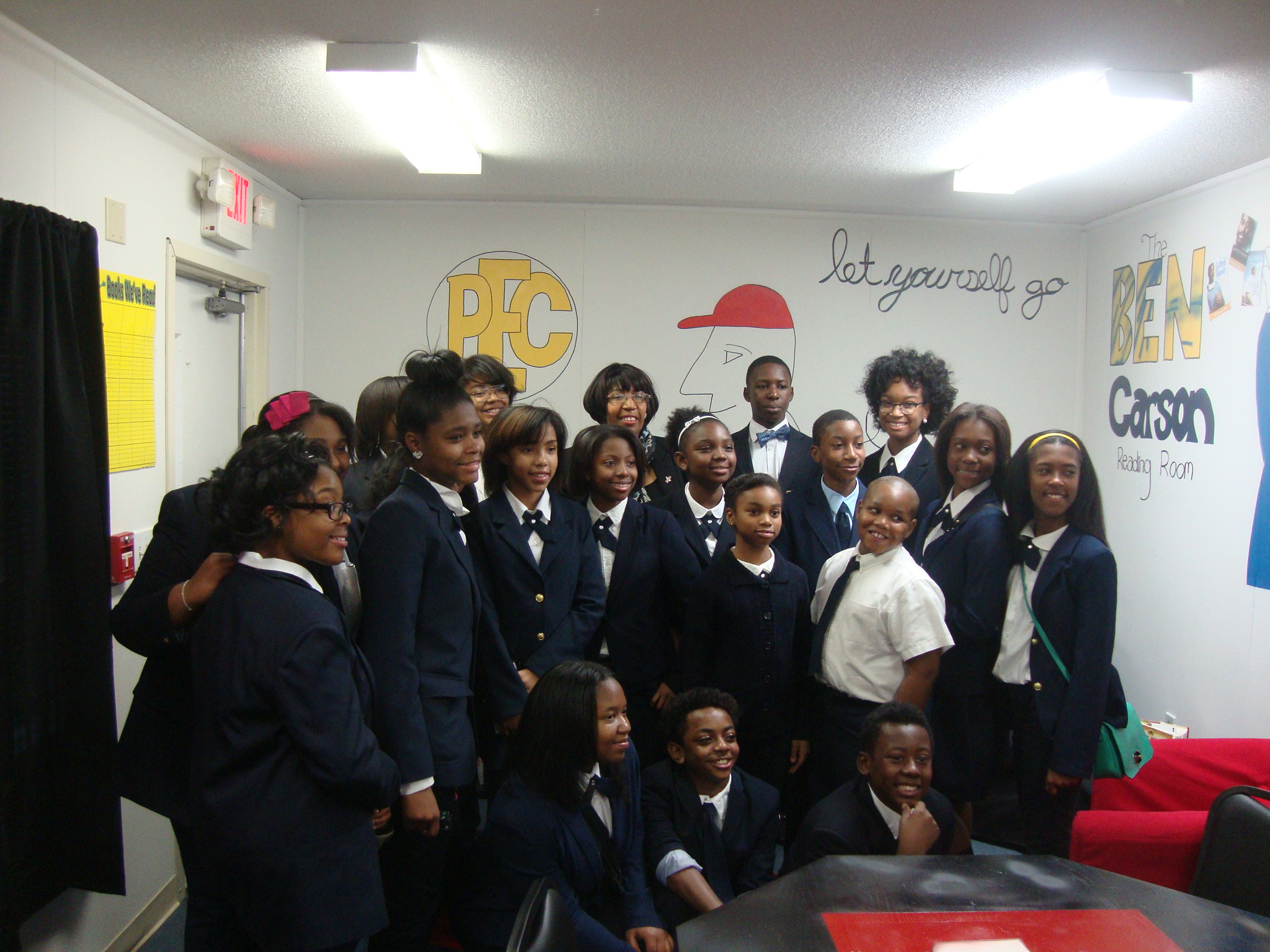 These reading rooms are particularly unique in that the artist, Kevin Cannon, a parent of students at the school, did not utilize a single paintbrush anywhere! Spray paint was carefully, studiously, and artfully guided by his talented hands to create all the artwork on all the walls of both rooms!  For more definition, like the smiles on the clouds, he handily (pun-intended) utilized magic markers!

Thank you again to all the educators and volunteers that made this possible, especially to Dr. and Mrs. Donald Janower for sponsoring the room.