Upon entering the school, you notice that the trophy case is huge and prominently displayed on the top shelf is the Carson Scholar trophy!  You really get the idea that the panda is the school mascot since there are several stuffed ones on the shelves amongst all the school awards!  One of their mottos “You can’t hide…that panda pride” is certainly applicable there! 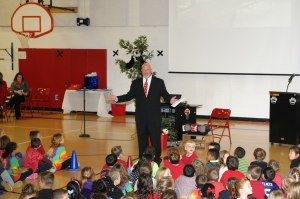 Two 5th graders escorted visitors to the reception room where pastry delicacies, including Bear Claws, and artfully arranged fruit were displayed. Gold foil potted Poinsettias were positioned on bright red tablecloths with panda sentinels watching over the food. Musically gifted string players performed under the leadership of teacher Mrs. Felicia Martin. The string quintet played mostly Christmas songs but was interspersed with classical music. From time to time, a piano soloist would share a selection.  The first pianist was Ethan Luu who played “King of the Beasts” and the second, Erica Honadel, performed the Tony Orlando signature song, “Tie a Yellow Ribbon.” Lastly, one of the cellists left her seat with the quintet to play Beethoven’s “Fur Elise” on the piano across the room.  They were all 4th graders!

The huge gymnasium was squared off by rows of vermilion red folding chairs. On the front wall behind the lectern was a large screen with a parade of photos showing the story of the creation of the room. Each side of the screen had potted bamboo trees on the floor, complete with pandas perched in the branches!

After his welcome, Principal Chris Cook officiated as emcee, first introducing the PMES Announcement Team (composed of 4th-graders) to lead us all in the Pledge of Allegiance. On his count of 3, the entire student body, as well as all the guests stood up in unison. 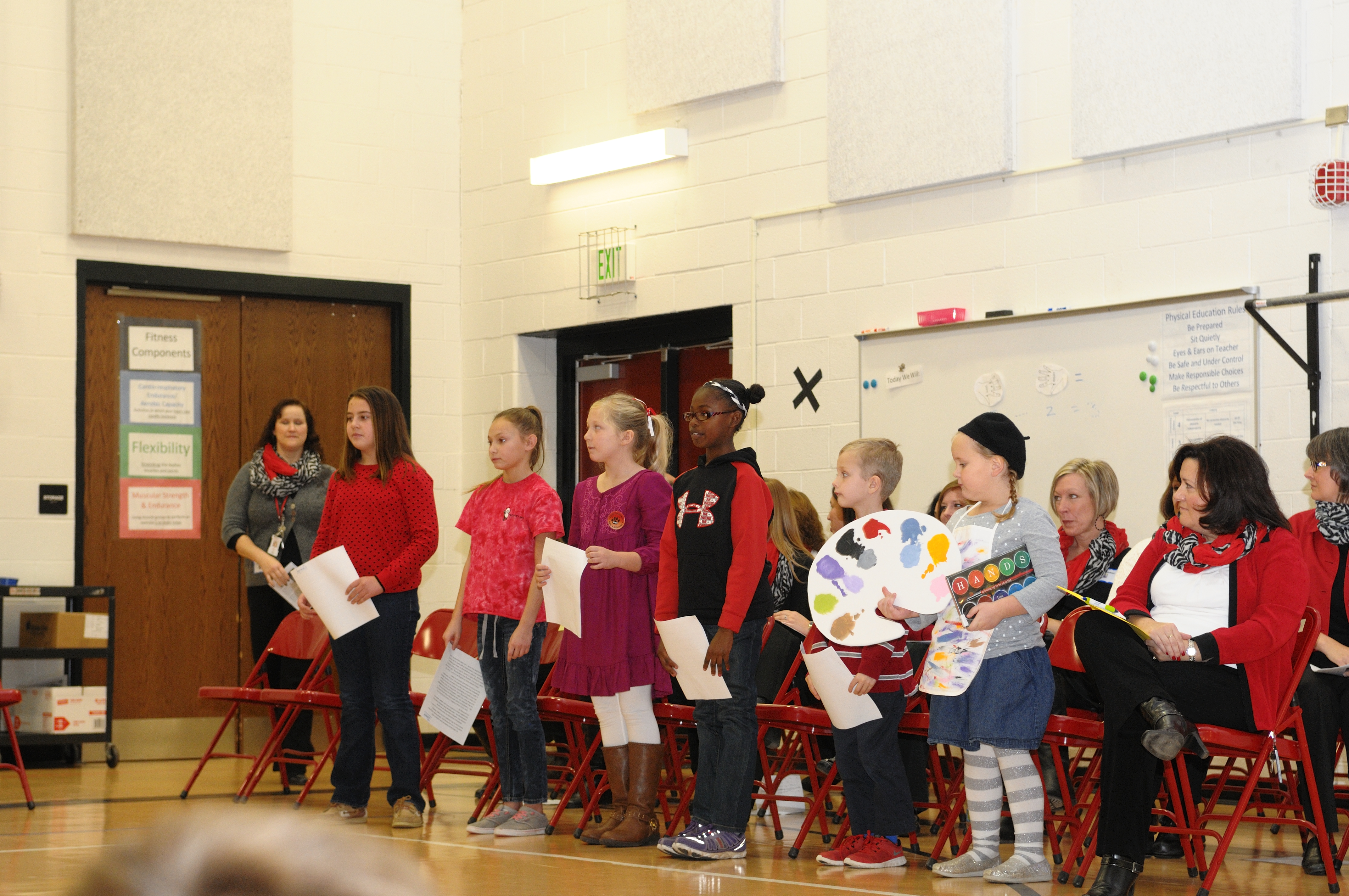 Acknowledgments of contributors came next as Principal Cook had teachers introduce their students who performed at the reception, and those who participated in the development of the room. He also thanked the staff at the Carson Scholars Fund, Harford Public School officials in attendance, PTA officers and last but not least, the donor of the room — Harford United Charities, represented by former County Executive David Craig and several board members.

Student orators ranged from kindergarten through 5th grade, answering the question, “If you could think big, what would you be?”  The kindergarten representative, Libby Maxwell, replied that she wanted to be an art teacher. First grader Ryan Kilchenstein came up with quite an out-of-the-ordinary career choice of a chocolatier! Jazlyn Ware, a second grade student, had decided on becoming a neurosurgeon as her career goal. The third grade contribution to the exercise, presented by Payton Kacher, espoused Dr. Carson’s steps to success, while 4th grader Jamie Wahl spoke on the significance of reading books in her life. Caleigh Kohr, an upperclassman speaking for the 5th grade, discussed why reading was special to her. Each of the student presenters were then presented with the gift of a red back pack from the Carson Scholars Fund by their respective teachers.

The sing-along, led by music teacher Jill Murray, featured popular children’s tunes such as “Twinkle, Twinkle Little Star” and “Up on a Housetop” with creative lyrics, like “read, read, read” instead of “ho,ho,ho.” Following the words on the big screen, the children became even more excited about books and what they can do for you!  The one based on the theme song of classic TV show and feature film, The Addams Family, was entitled, “Open a book” and had the refrain:

Give it a look…(snap, snap)

Tell all your friends, fun never ends, so open a book! 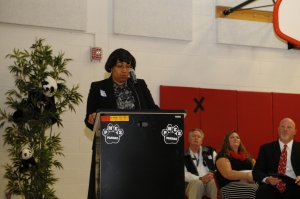 Gratitude was a cornerstone of the day. Candy Carson began by thanking the Harford United Charities officials, as well as all who were involved in enriching the students’ lives with this special endeavor. She shared stories of a successful friend who started out in the slums, who learned to love reading, as well as a patient whose disease process required surgical removal of half her brain for her to survive. This young lady worked so hard the year after her surgery that she rose to the top of her math class…with only half a brain! Of course, Mrs. Carson’s question to the students was, “If she can do that with only half of a brain, what can you do with a whole brain and a little determination?”

Former Harford County Executive, David Craig and then president of Harford United Charities, spoke of his appreciation of that organization. After thanking those involved in this wonderful project, he compared Ben Franklin, who in 1731 founded the first American library in Philadelphia, with Ben Carson, who founded the Reading Room program. He cited the statistics, revealing that Prospect Mill’s room is the 118th reading room established in 16 states. 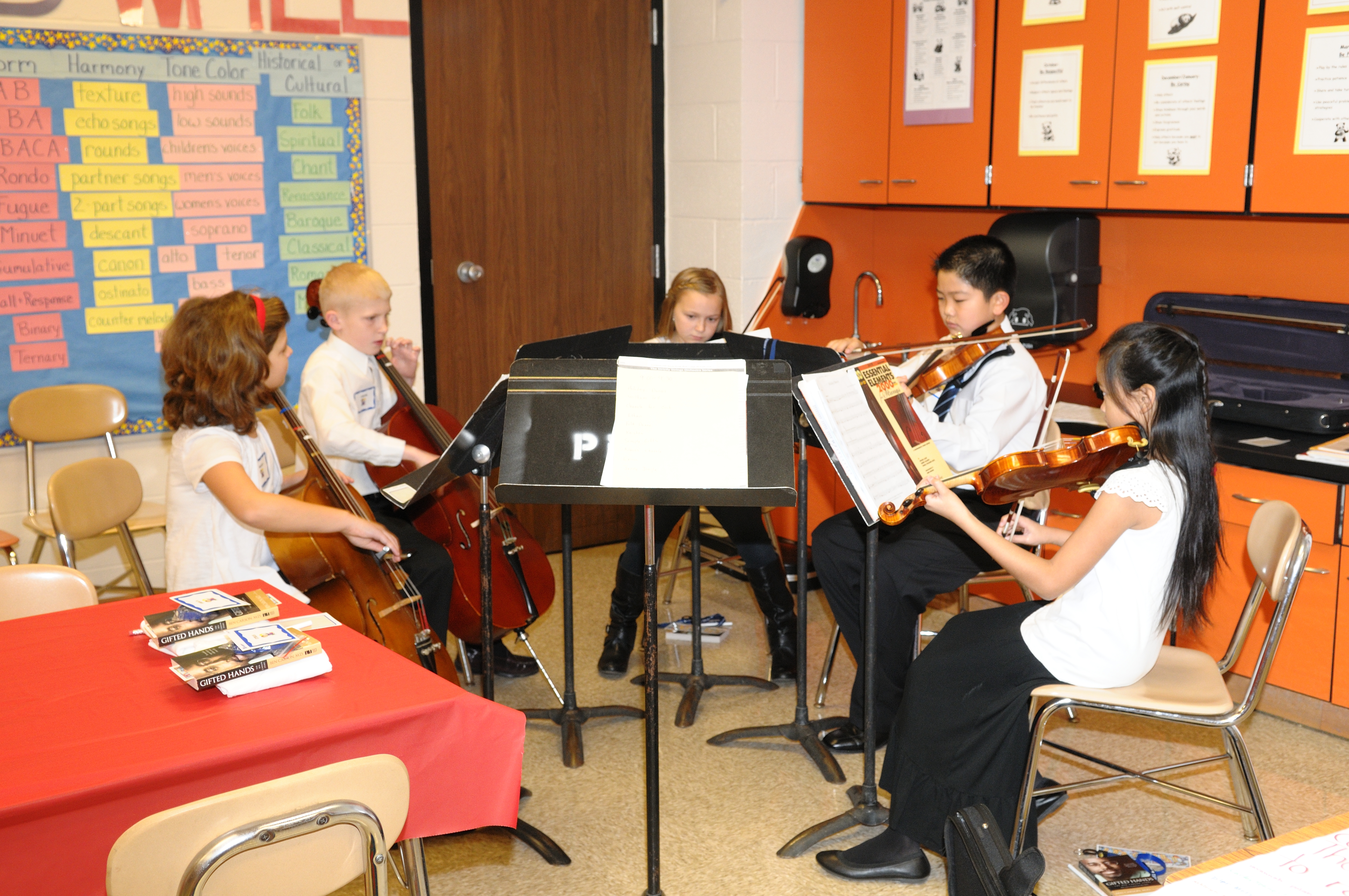 Dr. Carson began by expressing his gratefulness for the opportunity to help restore health or high function to patients as a neurosurgeon for over 30 years. Dr. Ben Carson’s video drew everyone’s attention back to the big screen. He expressed how thankful he was to have a mother who realized the importance of education and who with determination and perseverance instilled that same appreciation in her two sons. Dr. Carson’s mantra “the person that has the most to do with what happens to you is you” shows his belief that life is all about choices because you determine how far you go or don’t go. Another philosophy included in his speech was the importance of helping your fellow man. He ended with a quote from Harriet Tubman, “Every great dream begins with a dreamer.” He thanked the organizers for helping the students realize their dreams by providing a special way to develop themselves to be the best they can be.

In her closing remarks, Assistant Principal Marcia Fithian summarized the day’s focused values of education with “Today a reader….tomorrow a leader!” 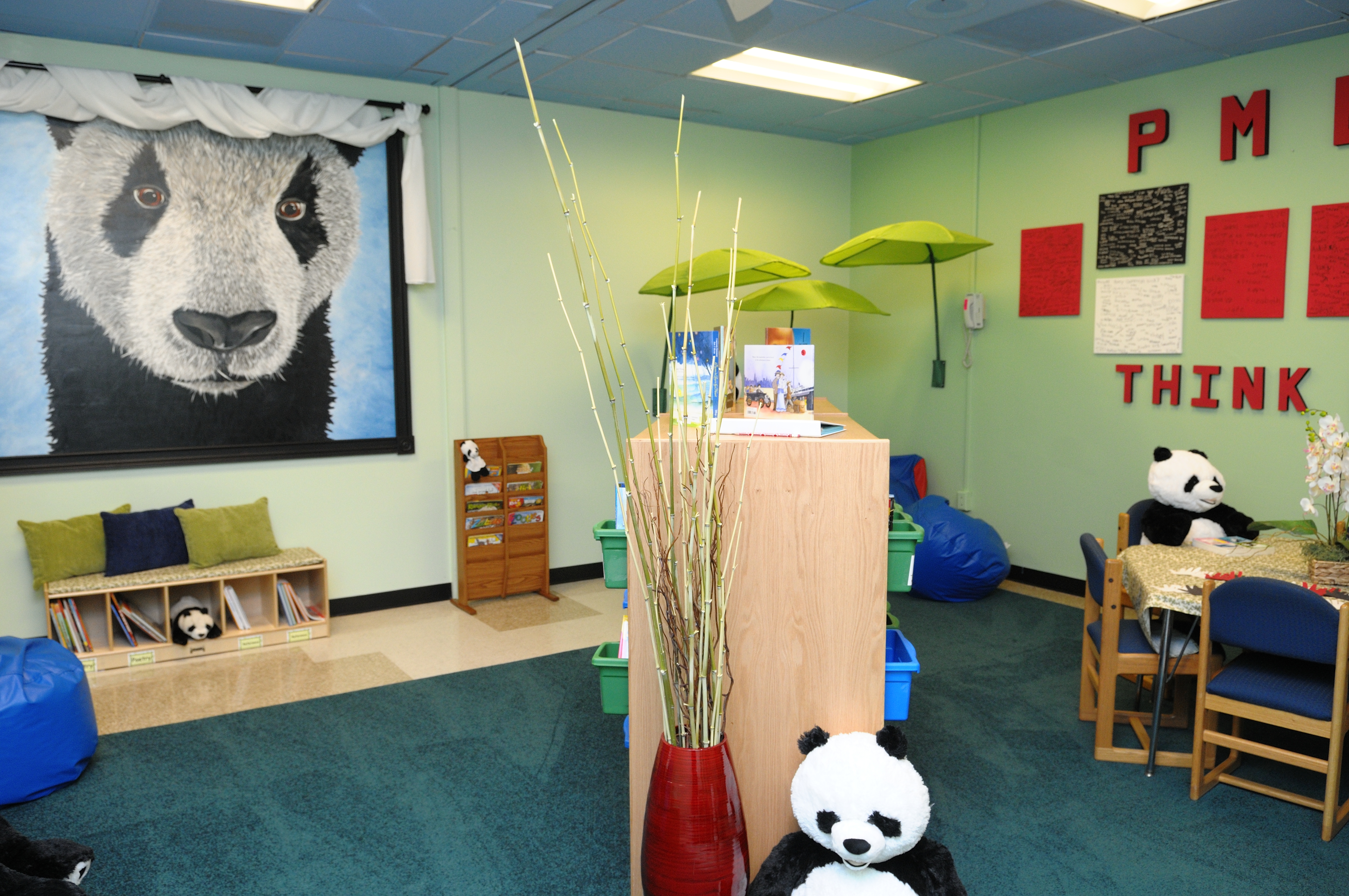 The newest Ben Carson Reading Room is populated with different comfortable seats accompanied with large stuffed panda “reading buddies.” Up against the wall were several L-shaped chairs, but these wouldn’t be utilized for videos as their name suggests. The videos would be developed in the students’ imaginations as they visit new worlds while reading books!! 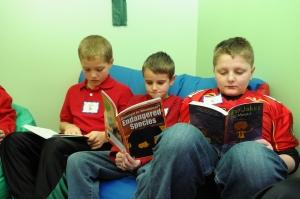 Central to the room was an extensive bookcase loaded with books. The school truly believes in their motto, “We believe, we learn, we go.” The crowning piece of the room is a huge detailed painted mural of a friendly panda that greets guests from the distal corner of the room as you enter. Green carpet and bamboo trees create an atmosphere of relaxation in an area similar to an easy-going panda’s natural environment. 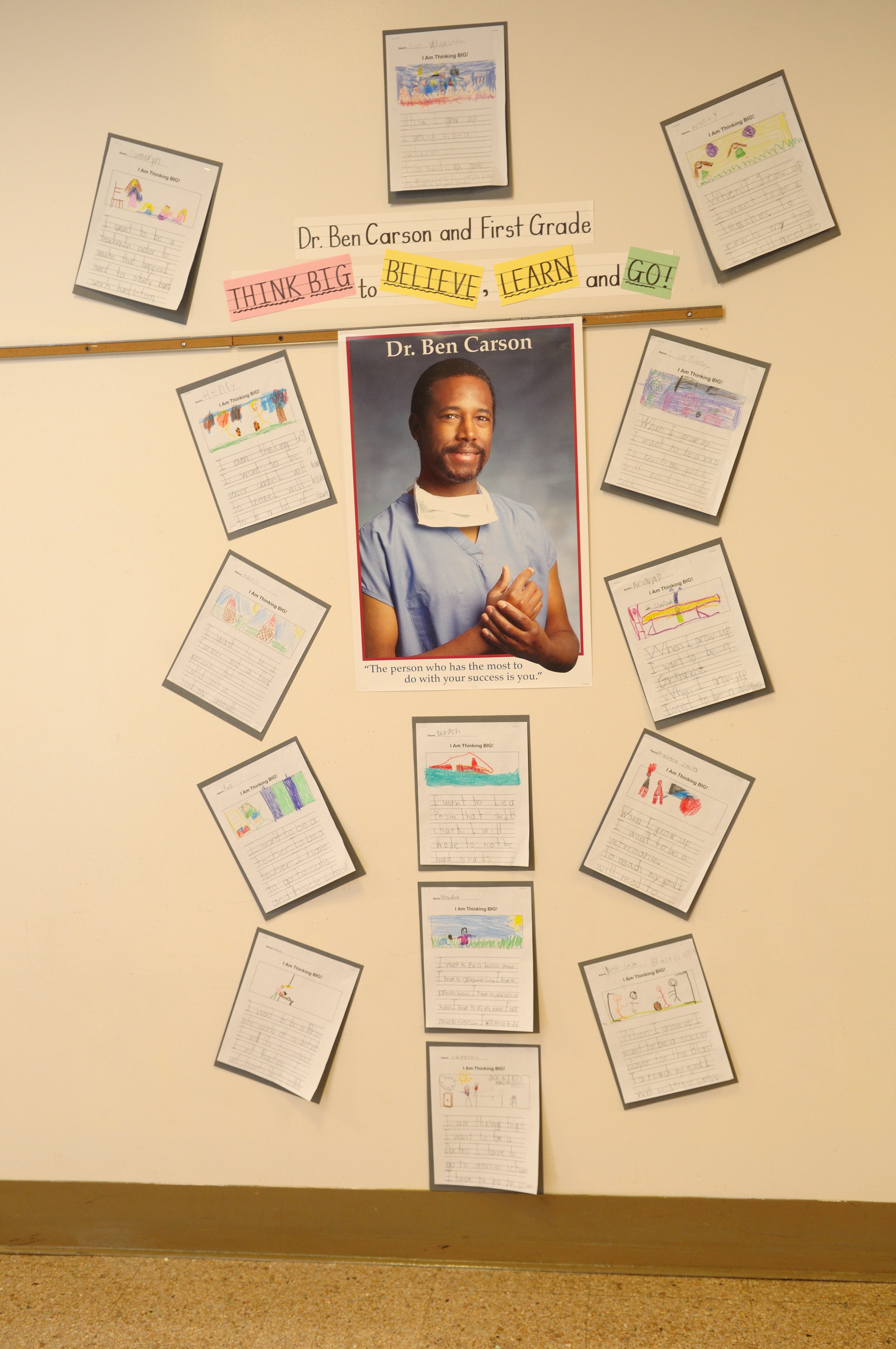 While the students were enthusiastically exploring the room and its literary treasures, the adults were as well!  The artists of the room, as well as others, were introduced and the program concluded with school officials honoring Carson Scholars representatives, Tammy Blazenyak and Jo Weisgal, with the status of honorary Pandas!

A special thanks must go to Harford United Charities and the Prospect Mill Elementary community for making all of this possible!