The snow flurries of yesterday did not in the least diminish the bright, sunny weather or dispositions of the attendees at the opening of the latest two Ben Carson Reading Rooms in Oak Lawn. At Sward Elementary, in the Chicago suburb of Oak Lawn, the gymnasium was filled with the 440 students who attend the school. They were filled with enthusiasm, which was evident by their brightly intoned, but respectfully subdued chatter. 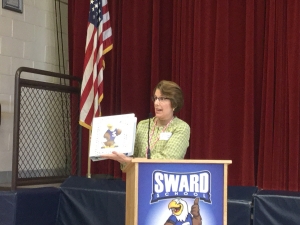 When Principal Lori Gloodt came forward to address the audience, her warm “good morning” was followed by the acknowledgement of many guests for the day. The guests included Mayor Sandra Bury, village clerk Jane M. Quinlan, school board trustee Terry Vorderer, D.A.R.E Officer Cronin, as well as  guests from the Carson Scholars Fund and from Advocate Christ Medical Center. All were in attendance to celebrate reading as the key to learning.

Everyone stood for the National Anthem, which was patriotically sung by the Sward Chorus, standing at attention and without any wiggles! The chorus was unified by their pale blue polos with the school icon in navy, and black slacks.

Superintendent, Dr. Paul Enderle, followed with a question to the students stating, “How many of you like to read and love to read?” After enthusiastic responses from the students, he continued with saying, “That’s what we’re here to celebrate today!” He went on to encourage the young people to “embrace a passion….a love for reading,” because it will put you on the road to success. He closed with saying thank you to the Carson Scholars Fund and to Advocate Christ Medical Center for their vision and support to establish this impetus for students’ successes in life.

The Director of Public Library, Mr. James Deiters, whose wife was an enthusiastic volunteer in developing the room, commented on his favorite books. He said that coincidentally, Dr. Carson’s favorite book’s author, who wrote Chip the Dam Builder, also wrote Big Red, a book that Mr. Deiters found particularly interesting.  Mr. Dieter’s favorite book was Ferdinand the Bull, which is about a quiet little bull who didn’t like to fight in a land where that’s all bulls did! He charged the students to ‘Think Big’ thoughts like Dr. Carson did and sit quietly like Ferdinand the Bull. He closed his remarks with thanks to the parents and especially to his wife who helped write his speech! 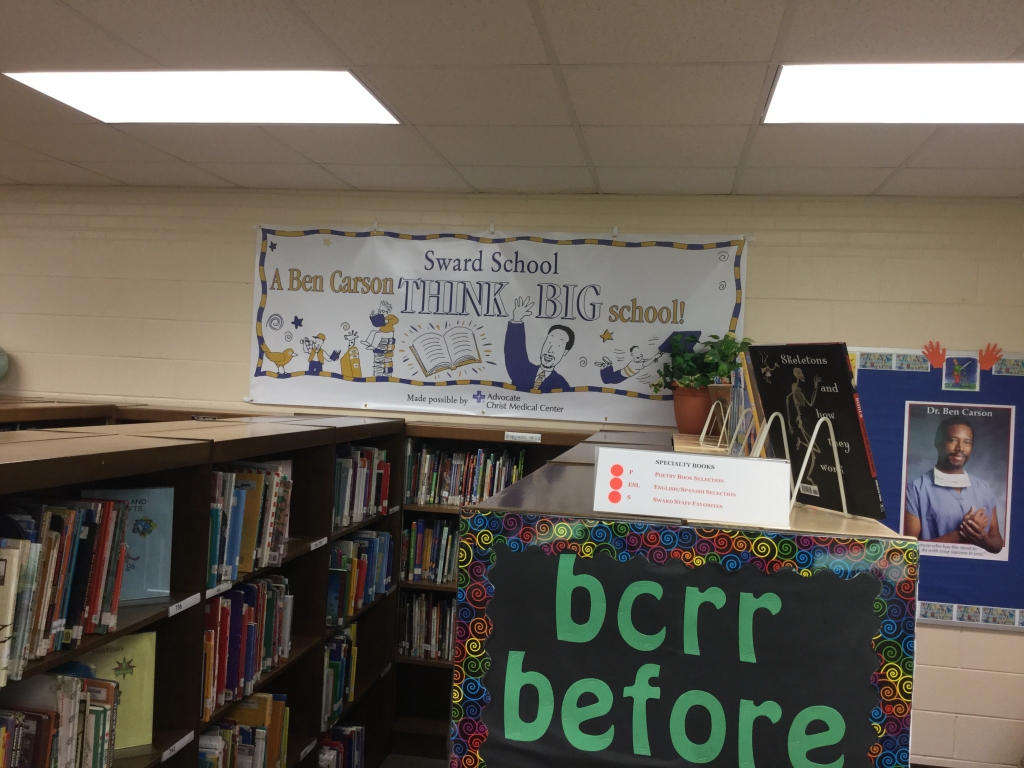 The Sward Chorus continued the program with a couple more songs, including the school song, which had been composed by namesake, Carl Sward, and one with the lyrics “Read to learn….learn to read.”

Candy Carson’s ice-breaker question to the students, “Are you ever bored?” was met with a resounding show of hands again! The questions which followed, “Do you have to be bored?” and “What can you do NOT to be bored?” were answered swiftly and competently with the answers “No” and “READ!” She continued with facts on the amazing capacity of our brains, including how much information can be processed in a second (2 million bytes!) She then followed with an example of one of her husband’s young hemispherectomy patient’s determination to study hard after the removal of the half of her brain where logic is processed. The patient then went on to attain the highest math average in her class and with only half a brain! This produced unanimous expressions of wonderment from the students! She finished her remarks with a request for the students to thank the people who cared enough about them and their futures to install a reading room, including the sponsor Advocate Christ Medical Center, their teachers, administrators, parents and the volunteers.

Ms. Toni Mooney Gardner, Advocate Christ public affairs and marketing manager, shared that she and Christ Advocate believed it is a privilege to be able to give back to the community in which they serve. Her quote from Maya Angelou, “Any book that helps a child develop a love of reading is a good thing,” summarized the focus of the day! The two reading rooms that were opening that day brought the total to 7 in the metropolitan Chicago area, with the first one just down the street at Dawes Elementary. For fun at the end of her remarks, she asked the students to try to guess her favorite book. It didn’t take long for Nina Merkle to win the prize with her guess of Green Eggs and Ham.

The video message from Dr. Carson began with his description of the difficult and rewarding work of being a neurosurgeon. Although he was extremely busy with his work, he explained that he and his wife wanted to do something to help students who are like he was as a kid, which is why a reading room was created at the school.

He spoke on how books can take you places and how you can explore the world, going anywhere you want, like the pyramids or become friends with book characters, like Charlie from Charlie and the Chocolate Factory. His mother knew that if you can read, you can do anything!  He finished with saying, “I hope you love to read as much as I do, and that you do it!”

While the students approached the stage for the final poem, Principal Gloodt reported that as a result of the Big Thinkers program challenge involving reading at home over spring break, 176 students (40% of the student body) read 89,206 minutes, which translates to over 1,486 hours!

Six students wearing Carson Scholars shirts in either black or white, recited sections of the inspiring poem, The More You Read. The smallest student stated clearly, “The more you read, the more you know,” which was followed by a sweet little girl from the same class, “the more you know the more you grow,” and then the older students completed the poem.

After thanking everyone for their participation and for coming out to show support, guests were then dismissed to go to the actual reading room site by Principal Gloodt. 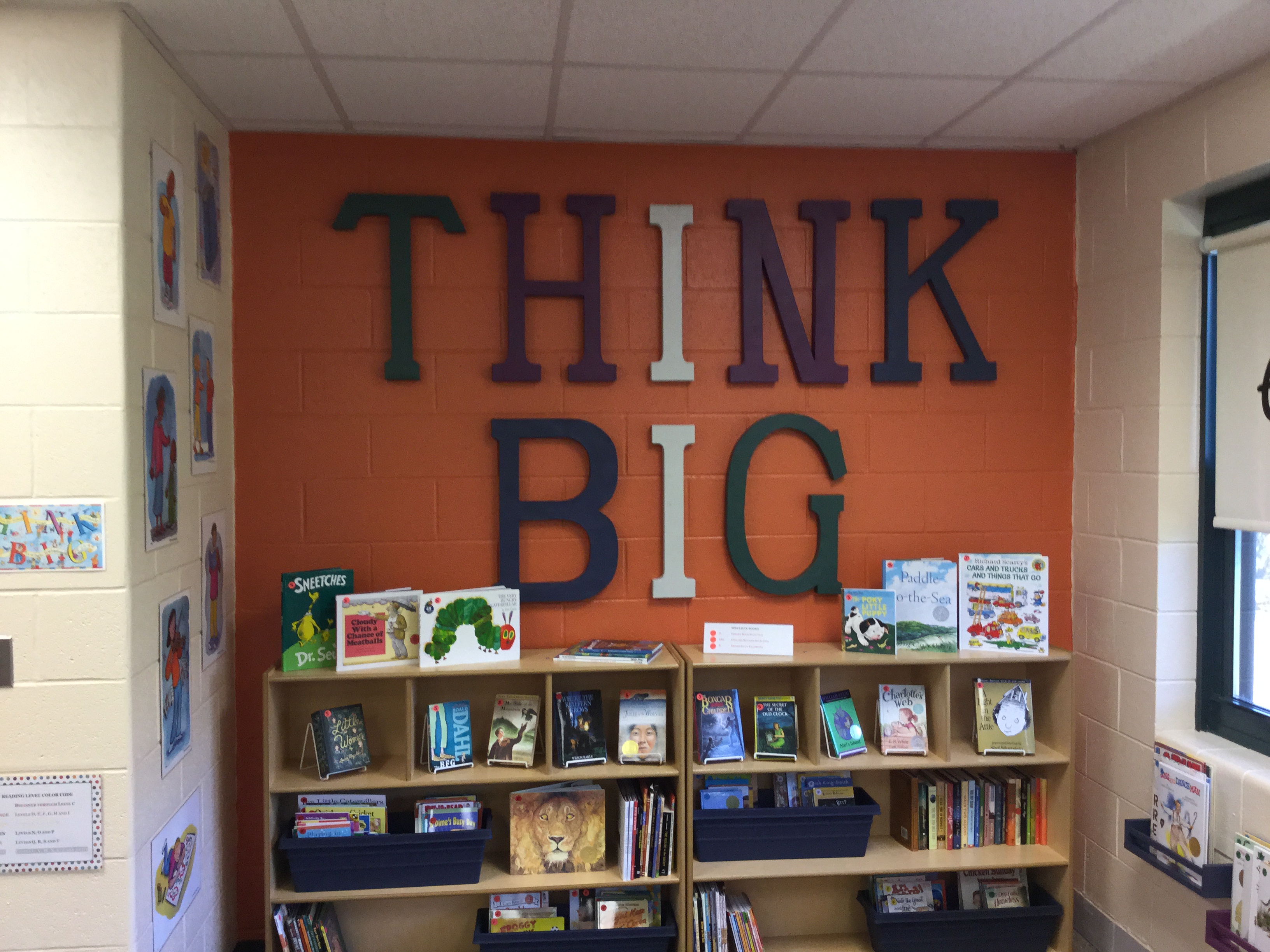 Positioned at the end of the library, it all started with the donation of a beautiful leather sofa in a burnt-orange hue. The comfy bean bag chairs in this room are called high-backs, which render more support than the conventional bean bag chairs. Four with their backs together are in front of the sofa, separated only by a patchwork rug in coordinating solid colors. 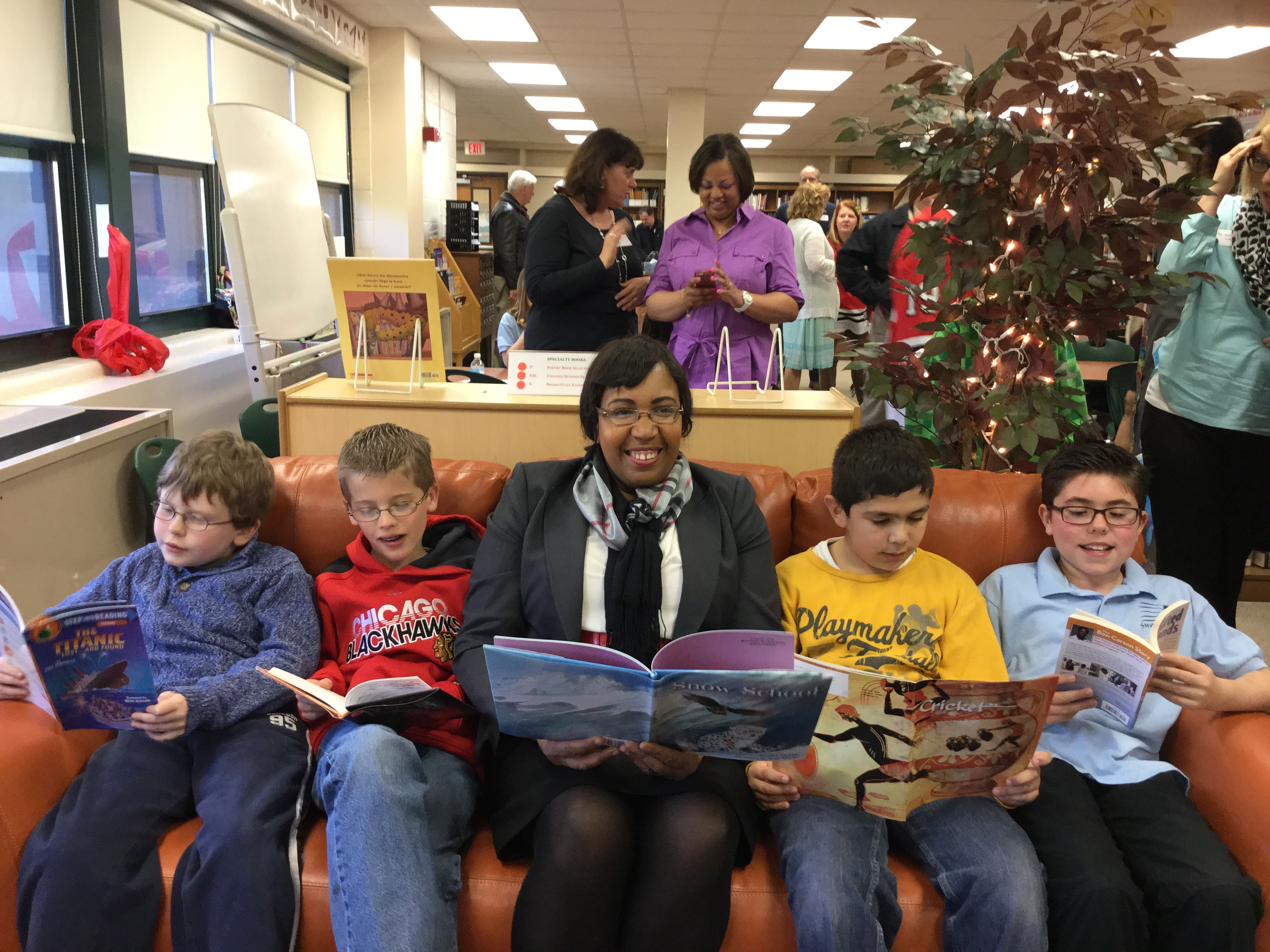 The muting of normally bright hues incorporated into the décor helps students focus more on the reading material rather than the seating. Instead of lime green, the green is a deeper hunter green; instead of pink, the predominant color in that family is a rich purple; instead of orange, it is muted to an almost brown hue.

The far wall encourages students to THINK BIG on an orange background and each white roller shade at the windows issues a challenge: explore, dream, create, imagine. Books, who have found homes in the deep green bins in the bookcases, face forward, showing off their covers, each asking visitors to read them. Under the window, a wall arrangement of books, similar to wooden saddle bags of varying colors and heights, were there begging passersby to pick some and read as well! 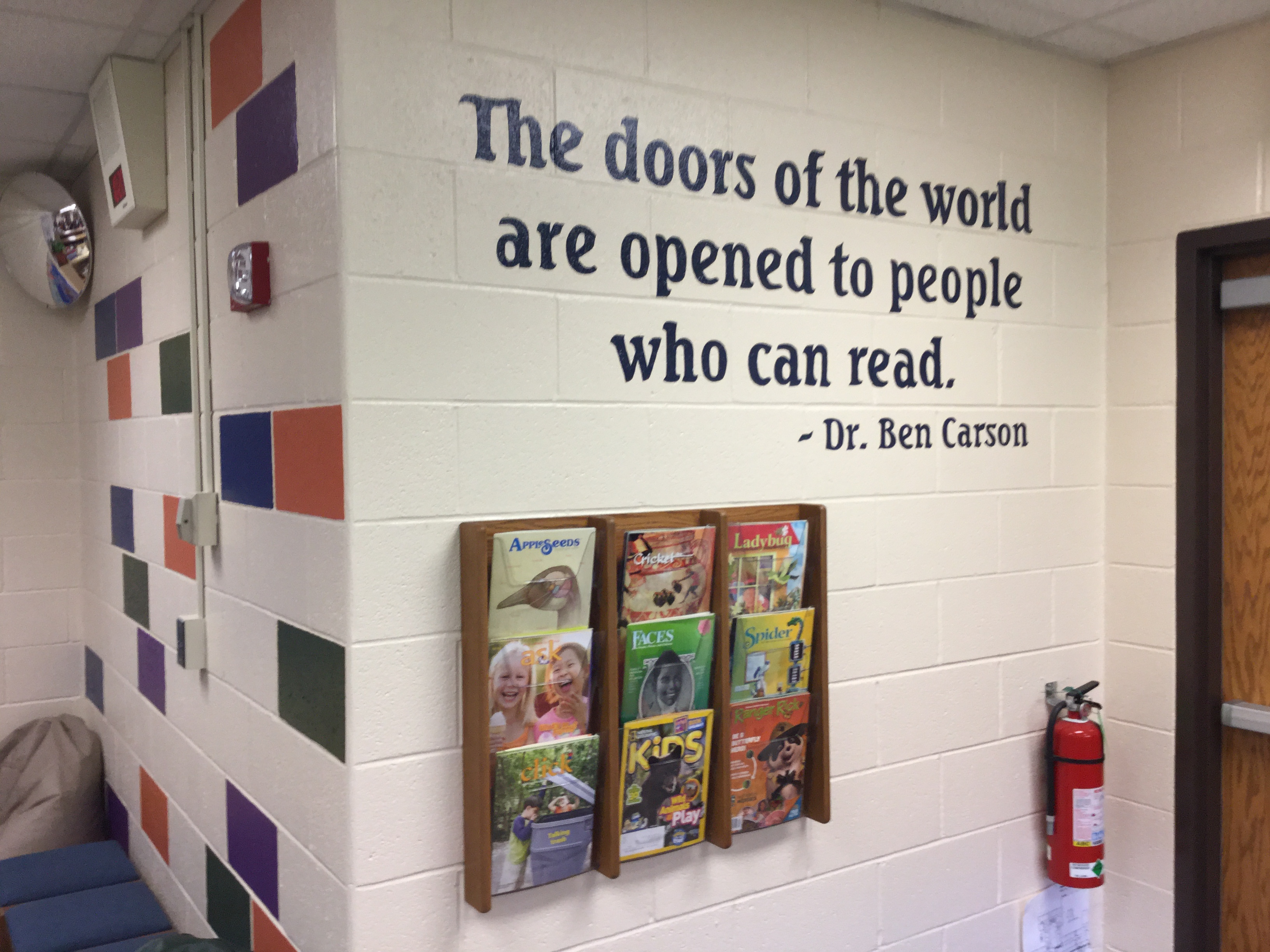 In the corner by the heating unit, on a small wooden table is a set of 8 or more e-books too! With the e-readers, this Ben Carson Reading Room has an even wider reach than most. What’s more incredible is that any student in the school system can access the e-books from their private computer or phone with their special passwords!!

Across from the windows, above an inviting display of magazines, a quote from Dr. Carson is painted on the wall, which says “The doors of the world are opened to people who can read.”  There is even a THINK BIG nook, where a poster of Dr. Carson is centered on a blue bulletin board. The bulletin board is bordered by THINK BIG bookmarks interspersed with hands in various colors. What a way to promote the hands-on experience and the fact that people of all colors, nationalities, and beliefs are welcome to partake of the treasures of the reading room!

Thank you to Advocate Christ Medical Center for sponsoring this room.

And the author, Candy Carson, would like to personally thank little Keira for sharing her doggy photo with a friend who recently lost her little pooch. To Keira, “It really made my friend feel a lot better! So thank you, Sweetie!” (and forgive me if I misspelled your name)