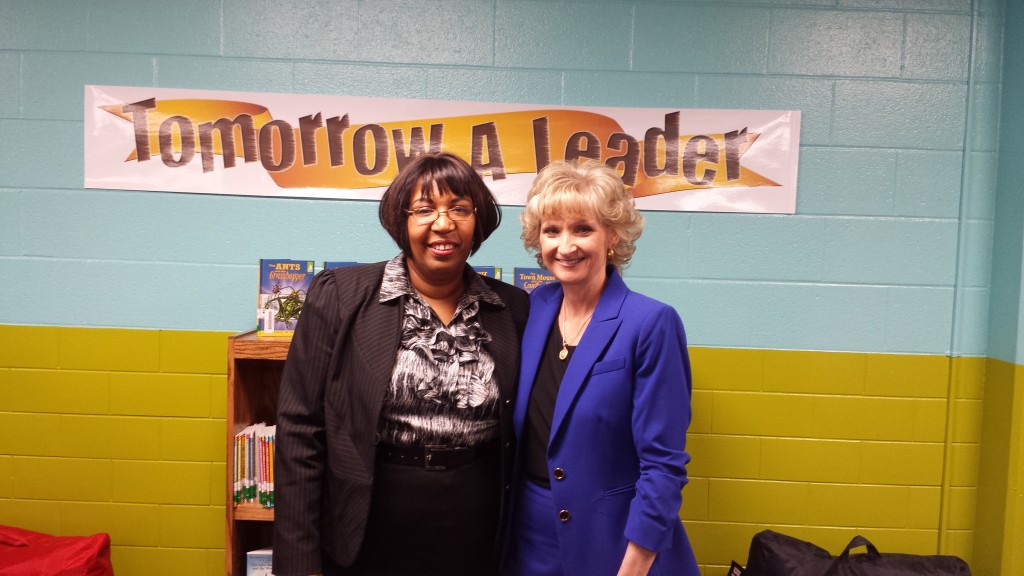 The program began with a welcome from school principal, Dr. Stephanie Phillips, who acknowledged all the dignitaries in the audience.  She stated that Washington Jackson School was originally a high school, and earlier this year at the 50th anniversary celebration, they made the exciting announcement that a Ben Carson Reading Room would be installed right in that very building!

Superintendent Dr. John Frossard followed with memories of his elementary school days, when his faithful dog, Twinkle would escort him to and from his bus stop. He said he really didn’t like school much and the best parts of the day were recess and leaving school on the bus to hook up with Twinkle, who’d be patiently awaiting him at the stop.  But early in his school career, there was a teacher who sparked his interest in reading and learning, and there was no stopping his academic success from that point on!  He encouraged the students to take advantage of the wonderful opportunities the reading room gives them to achieve success too!

Mrs. Owen’s 2nd grade class then presented the acrostic THINK BIG, in 3’ tall fluorescent colored letters.  As they carefully brought their letters to the microphone, one student would say what the letter stood for and the accompanying student would share an example from his/her life.  For example, after honesty’s ‘H’ was identified, the accompanying  young man explained, “My father asked me if I had done my homework, and I gave him an honest answer!”  at which point he and his associate quickly crossed to the other side of the stage…was it to avoid the question of what his answer was?

On the big screen, with the modern technology of Face-Time, Dr. Carson addressed the group, sharing his rise from poverty to academic and career success due to reading.  “Reading opens doors” was his focus, and he concluded with, “We all need to THINK BIG!” 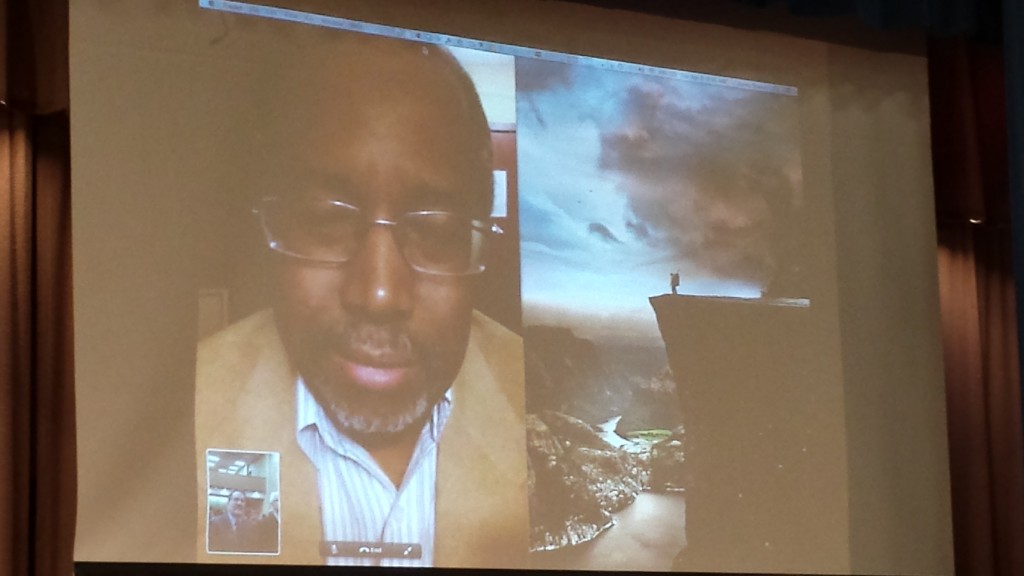 Candy Carson spoke of the unique worlds one could visit while engrossed in a book…being a laser beam in the hands of a surgeon that takes out a tumor, flying around as a butterfly or bumblebee who tastes the different flavors of various flowers, or even having adventures as an astronaut!  The brain’s power is awesome…it can process 2 million bits of information per second, and has over 14 billion cells and connections!  So “I can’t” shouldn’t be in anyone’s vocabulary!

To close the program, Principal Phillips introduced the hard-working committee members for us to show our gratitude.  She also informed the audience of another special reading event at the school that would occur that evening:  the ‘Llama, llama, red pajama night’ where pre-K to 2nd graders could come in their jammies to the school cafeteria at 6:30pm to enjoy fun literature presented by a celebrity reader.  Michelle Dixon from local TV channel 3 would be the reader that evening and she was asked to stand. (Later Michelle off-handedly commented that she had her red plaid pajamas all ready!)  This event would be funded by the United Way.

The day was bright with sunshine, but the room was giving that sun a run for the money with its sunny, enthusiasm-eliciting décor!!  The delightful, colorful room had lower walls of green for growth with the top half done in azure blue, directing thoughts to the idea that “the sky’s the limit”!!

In the room’s center, cubed black suede ottomans with storage for books sat under a round oak table.  Various-colored stuffed teddy bear “reading buddies” relaxed on brightly colored beanbag armchairs, silently beckoning students to join them with a book!  In between those chairs along the walls were bookcases filled with every childhood genre you can imagine!  The aqua wall with windows quietly shouted in bold white letters one of Dr. Seuss’ oft-quoted dictums, “Oh, the places you’ll go!”  On another wall, another encouraging aphorism was “Why fit in when you were BORN TO STAND OUT?”  Even a quote from Ghandi was painted for all to see, “YOU must be the CHANGE you wish to see in THE WORLD”.   A group of Dr. Seuss characters in full color, cavorting on an oval area rug bordered by comfy kid-sized black upholstered bend-wood-armed chairs and sofa was in one corner.  Across from that with plenty of bookcases in between, was a special little haven with tie-back curtains encompassing a red gaming chair, where the ‘game’ is reading!! 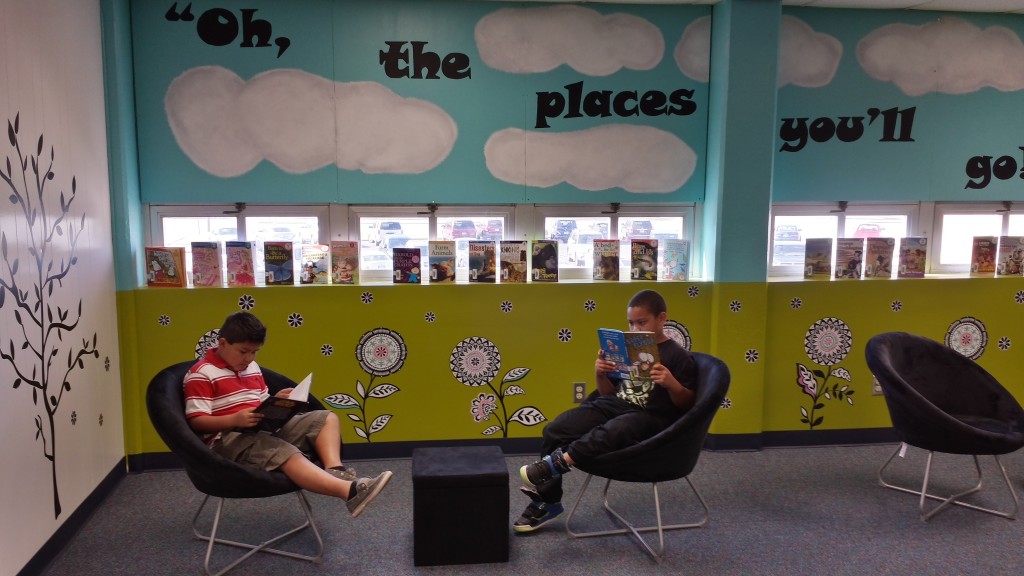 Another wall’s focus was a framed mural of happy children engaged in various fun activities among clouds, entitled “Literacy: A path to Peace.” Highsmith, Inc. (a library resource company) commissioned the original 4×7-foot mural for the American Library Association as part of a limited edition collection by established illustrators, and this one was to be painted by children’s book illustrator Susan Guevara.   The banner at the top of the mural makes one ponder the magic of reading:  “Books open like wings, carry me into gold quiet, unfold into skies, deserts, and deep long ago gleaming seas.  Words whisper and sing, ‘We can grow paz, paz, a gentle peace’ ”  These poetic thoughts were penned by acclaimed author Pat Mora, the originator of El Dia de los Niños, El Dia de los Libros (Day of the Child/Day of the Book), also known as “Día”.  And “Dia” is a celebration based on childhood and literacy that began in 1997 which borrowed from the traditional Mexican holiday “El día de los niños”. The American version expanded to include literacy and bilingualism when Pat Mora took up the cause in 1997.

Below the mural, children are encouraged to “Learn…Grow…Read…Dream” as these words are repeated in green along the edges of the rich, brown carpet below the mural.

A tall, brown, leafless tree was painted against a white picket fence on the last wall.  But it would not be bare long, since green tree leaves would be added to it as students completed the literary leaves of their leisure books!

The library’s tables were covered with spotless white tablecloths centered with red or blue cowboy bandanas under Texas-themed centerpieces!  Kid-sized cowboy hats were on several tables and even new pink leather cowgirl boots sat on one bandana!

The chocolate cake and the white cake each had an encouraging theme about reading, including a picture of the school and the acrostic “THINK BIG”!  Celebrants enjoyed the rosy punch, mixed nuts, and the melt-in-your-mouth-mints that rounded out the celebration gourmet delights! 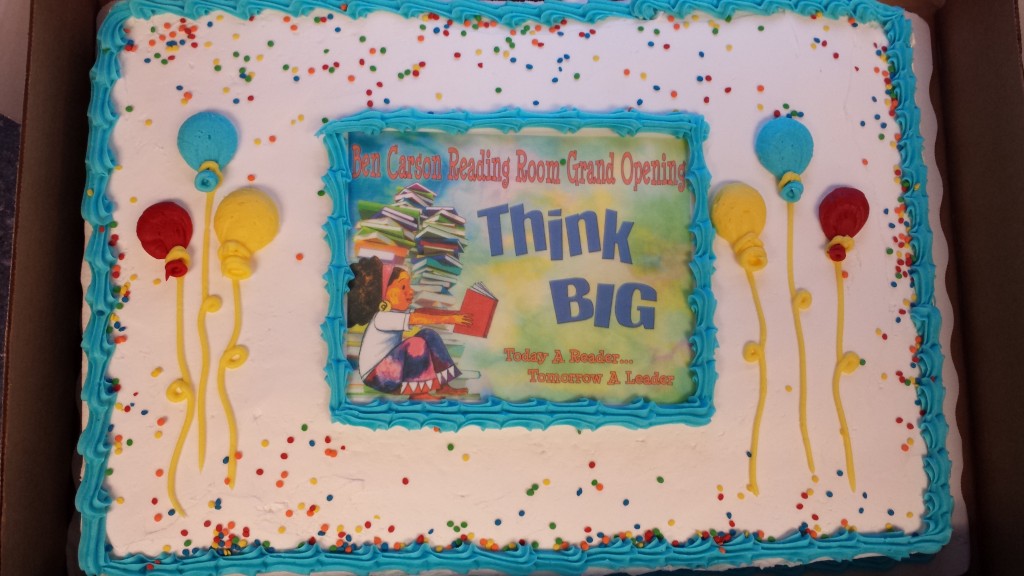 Many sincere thanks go to the organizers, committee members, educators and “hands” worked diligently to provide the children with such a wonderful room. And hearty thanks also go to Mrs. Kay Dillard and the Dillard Foundation whose generosity made this all possible!