Trailblazing as the first school to have a Ben Carson Reading Room in Frederick County, Maryland, Wolfsville Elementary makes its mark again!   Wolfsville alumna Marlene Grossnickle Young and her husband Mike decided to give back to the school that gave her such a great start!  Long-time supporters of Carson Scholars Fund, these beneficent individuals couldn’t wait until Christmas to have the school open its gift!

In spite of the cold, a warm welcome was received by all visitors as school representatives gathered in the foyer to offer firm handshakes.  Once inside the school gymnasium, Principal Festerman acknowledged several important guests from the community, including:  Mr. and Mrs. Mike and Marlene Young; Mrs. Candy Carson; Dr. Theresa Alban, superintendent of Frederick County Public Schools and Kathy Prichard, instructional director of Frederick County Public Schools.  Cindy Doggett, Committee Chair and media specialist for the school, spoke on the importance of the reading room and the development process, from the seed of a thought to full fruition of all the combined ideas of the organizers.

As a graduate of Wolfsville Elementary, principal benefactor Marlene Young shared poignant memories of her time there from a very relevant historical perspective.  Her inspiring journey down memory lane progressing through her life helped the students to understand how valuable the academic base she received at Wolfsville was in propelling her into a successful career.  She continued by introducing her family members who were present for the event, which included five generations!  Ms. Virginia Draper was also introduced, one of her former Wolfsville Elementary teachers who was instrumental in developing her love of writing.  Another office staff member from Marlene’s heyday was also present and acknowledged by her.

In a prerecorded video, Dr. Carson addressed the audience with two main ideas: the person who has the most to do with what happens to you is you, and how important reading is in that process.  He expressed his appreciation to all who made the reading room possible, including the principal and Mr. and Mrs. Young. Being married to a neurosurgeon has its advantages, Candy Carson quipped as she continued with facts about our amazing brains.  The brain’s ability to process more than two million bits of information per second and the fact you cannot overload it, since it would take over three million years to challenge its capacity even if you learned as quickly as one fact per second is something we should all remember!

Wolfsville Elementary is not a stranger to the Carson Scholars Program as was evidenced by the scholars who were in attendance.  School counselor John Giffin acknowledged Jared Miller, Tyler Michael, three-time Carson Scholar Jeremy Harshman and four-time Carson Scholar Catherine Toms.  The program continued with remarks from Frederick County Schools Superintendent Dr. Theresa Alban, who clearly expressed her support of the project and charged the students to utilize the special gift they had received.

More than ten 4th and 5th grade students dressed as their literary favorite characters as they enthusiastically recited their impressions of the books they appeared in! This was followed by a rousing song “In the Pages of a Book”, where the words underscore the fun, joy, and excitement of discovery one experiences while reading. The principal closed the program with gratitude towards each and every person who helped to make the reading room possible.

The room was another spectacular rendering of combined efforts to entice children to learn to love learning. From the various vibrant shades of bean bag chairs, to the multicolored world carpet, to the expressions on the animal’s faces in the mural as they appeared to be looking over readers’ shoulders with looks that begged “ooh, what happened next?” This room is another winner!

The historical section of the mural has the original church building of the area, which was not only utilized as a place of worship, but also as a gathering place for the community.  Next to the original is the current, modern church building that is utilized by descendants of that congregation.  And finally, the last building is the current school building.  In keeping with how these community edifices supported the development of its constituents, their pictorial portrayal forms the backdrop for several students in the process of actively reading.  The first two students in the mural are relatives of the donors!  The room is a legacy, very beautifully painted by Muralist Yemi Fagbohun who actually had numbered prints made and gifted them to committee members and other attendees! 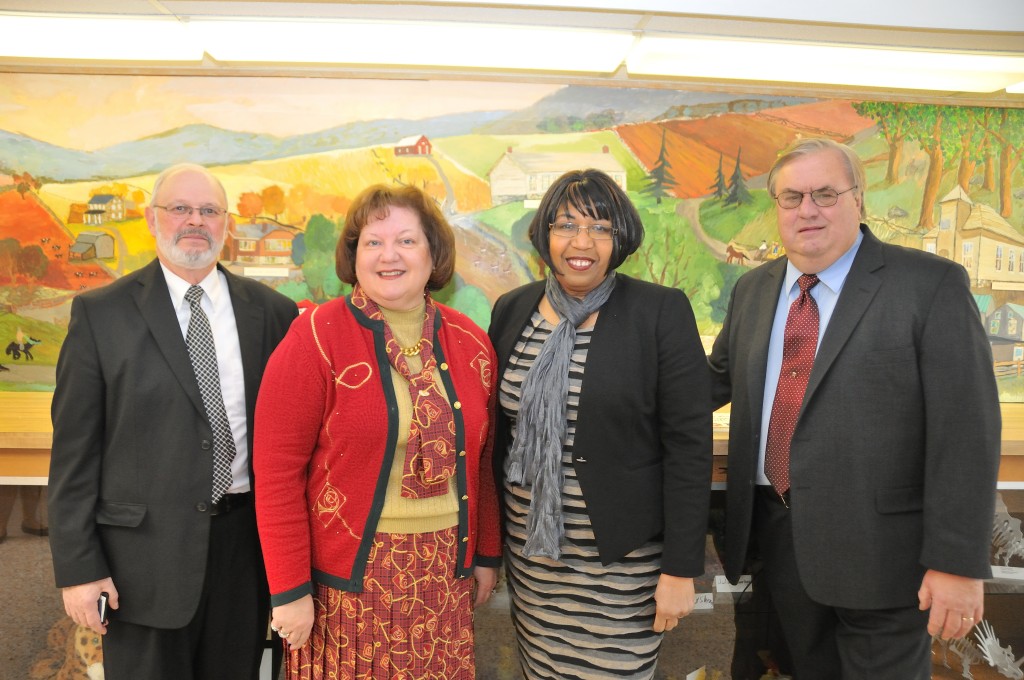 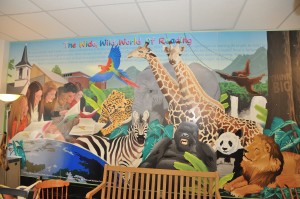 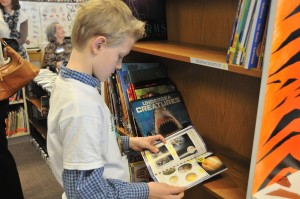