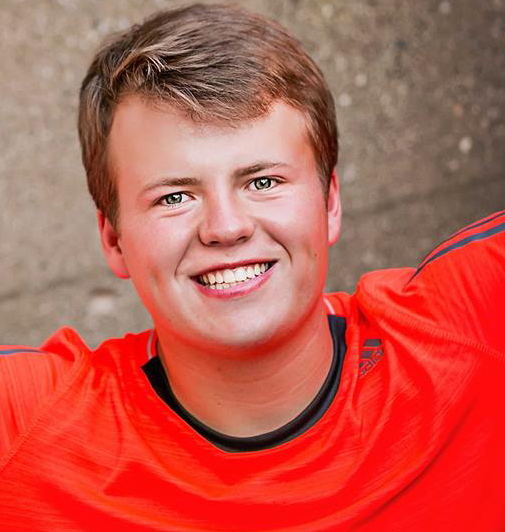 Taylor is a 12th grade student at Harper Creek High School. In school, Taylor is involved in the National Honor Society, as well as the Math and Science Center Eco Club.  He also plays the trombone, saxophone and piano for the school jazz and marching bands. He has received numerous awards for his academics including the Outstanding Math Department Student of the Month Award in calculus, the highest Honor Roll Award and the Academic Excellence Award for English, Calculus and Physical Science. He enjoys playing on the varsity baseball, basketball and tennis teams. Impressively, Taylor is an 8-time Carson Scholar who not only excels in the classroom, but in the community. He volunteers at his high school as a lead tour guide, assists as a coach for a youth basketball camp and helps teachers in their classrooms.

An adorned Battle Creek Central High School Gymnasium was the presentation venue for the 14th Annual Battle Creek Awards Reception held on Friday, April 29th. Approximately 400 guests attended the event to spotlight the best and brightest in Battle Creek. The dynamic Terry Burleson once again enthusiastically emceed the evening. Program Officer of the W.K. Kellogg Foundation, Diane Smith, delivered thoughtful remarks about the importance of celebrating academic achievement in the company of family and friends. Jody Gibson, Vice President of Social Responsibility for the Kellogg Company, shared personal reflections of the motivating educators in her life. Amy Warner, Executive Director of the CSF, highlighted the program’s milestones and Battle Creek’s 14 year track record of honoring high academic achievers. Dr. Ben Carson inspired scholars to reach for the stars via a video message in absentia. The Battle Creek Central Jazz Band added excitement to the already upbeat atmosphere with several numbers including the contagious “Up Town Funk”. BCPS Superintendent, Kim Parker-Devauld, introduced CSF Alumni superstar, Madeline Stagner, who captivated the audience as she shared her experiences and successes as a Carson Scholar.  Tyshaan Willams, a 7th grade scholar, shared heartfelt words and Samuel Wright, 10th grade scholar, delivered his hilarious and touching essay. The evening culminated with the presentation of the scholarship certificates and medals being awarded to the 33 new and 12 previous scholars.  At the end, Battle Creek Carson Scholars sported sunglasses because “their futures are so bright!” View photos from the Battle Creek Banquet here.

Photos from the 2015 Battle Creek Banquet.

On a long, dreary rainy day, the clouds parted in the late afternoon and the sun smiled down in anticipation of the 12th annual Battle Creek Carson Scholars Awards banquet to begin!

The event was again held at Battle Creek Central High School…Bearcat country!  The huge school gymnasium was transformed into a lovely banquet hall with blue floor covering and blue and yellow accents all over.  Over 300 were seated at the white- cloth-covered tables which had 2’ diameter bud vases with daisies and blue asters.  And the large bouquet flowers in front of the lectern were yellow zinnias and royal blue delphiniums in a large white basket. Read more.